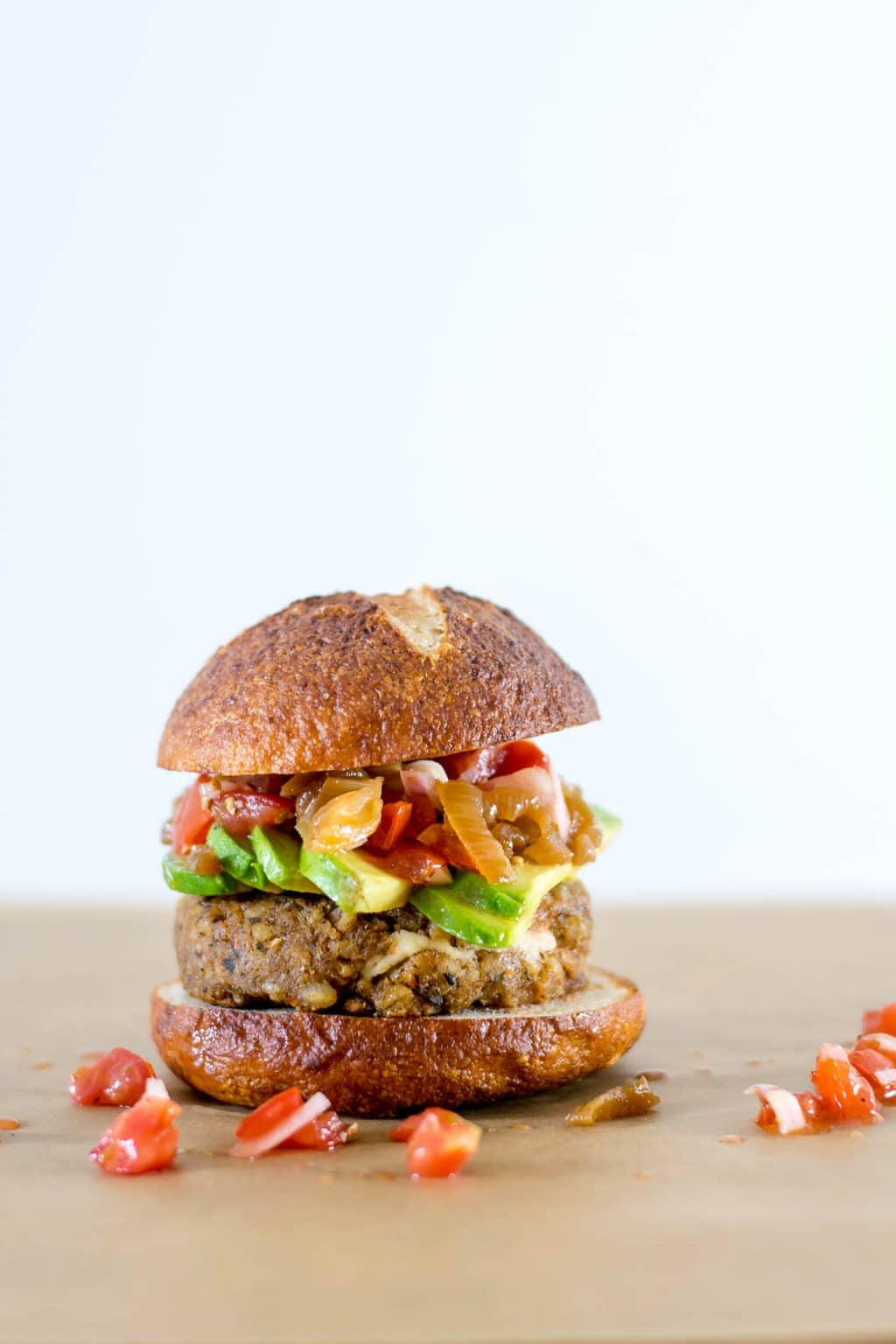 I’m sitting here trying to think if my summer eating and cooking is actually any different than my wintertime eating. I know some people avoid the stove as much as possible, but hey even when it hits 90 ºF I’ll still turn on the oven (apparently). I probably make less casseroles, but like, they’re as convenient in the summer as they are in the winter! I will say that I get 1000% more inspired by summer produce and eat about 12x as much fruit (like the time I got 22 mangoes and ate approximately 90% of them by myself–though making these mango lassi’s definitely helped). Ok, so I love taking advantage of seasonal produce, and you see that with my recipes! Rhubarb took center stage for awhile and I made my almond rhubarb bundt cake, corn has made a small appearance in my sweet corn velouté, but it’s still early in the season, asparagus took over my produce drawer for awhile and it was delicious on this asparagus pizza.

But beyond the produce, I’m not sure how different my styles are. We live in an apartment, and I don’t currently have an outdoor space for a grill. I’m not that into raw foods, though I do find salads more varied and interesting with summer produce. But one thing I definitely don’t think to make when it’s cold out is veggie burgers! Even if I didn’t grow up with barbecue filled summers, I definitely associate summer with foods that are regularly cooked on a grill. And that means that I like to make burgers! Bean burgers and seitan burgers. Burgers filled with veggies and grain or packed with protein. I really love them all and I love how creative you can get with them. Though, the classics are great too! 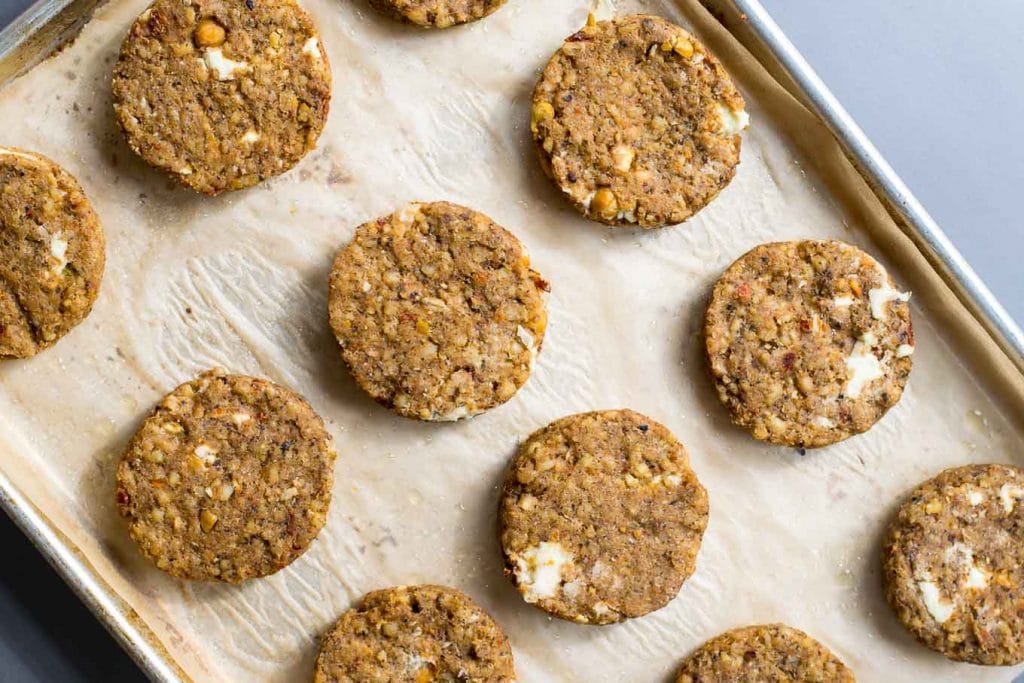 So last weekend when I realized the Fourth of July was coming up and I hadn’t made burgers in over a year (because I was out of the country for most of the summer), and I had to rectify it! I made two kinds of veggie burgers for a small burger party–I mean, 4th of July party–with my friends. The first ones were delicious southwestern black bean beet burgers, spicy, juicy, and a beautiful pink color from the beets, they were very well received. The other burgers I made were these mediterranean spiced veggie burgers, stuffed with my delicious, creamy, homemade almond cheese and topped with fresh from the farmer’s market, garlicky, marinated summer tomatoes. Equally well received! Honestly I spent the rest of the week eating the leftover burgers, taking turns between the two, and could not make up my mind as to which was my favorite.

These burgers were SO GOOD! They are nice and chewy from a base of mushrooms, barley, and chickpeas. None of that all too common soft or mushy veggie burger nonsense here. They’re held together beautifully with roasted eggplant and vital wheat gluten not only binds the burgers but also lends a wonderful chewy texture once baked. Deliciously flavored with umami-rich ingredients such as mushrooms and sun dried tomatoes, the caramelized flavor of onion and plenty of sharp garlic, as well as the aromatic herbs: thyme and oregano. That creamy cheese-stuffed interior isn’t bad either ;). 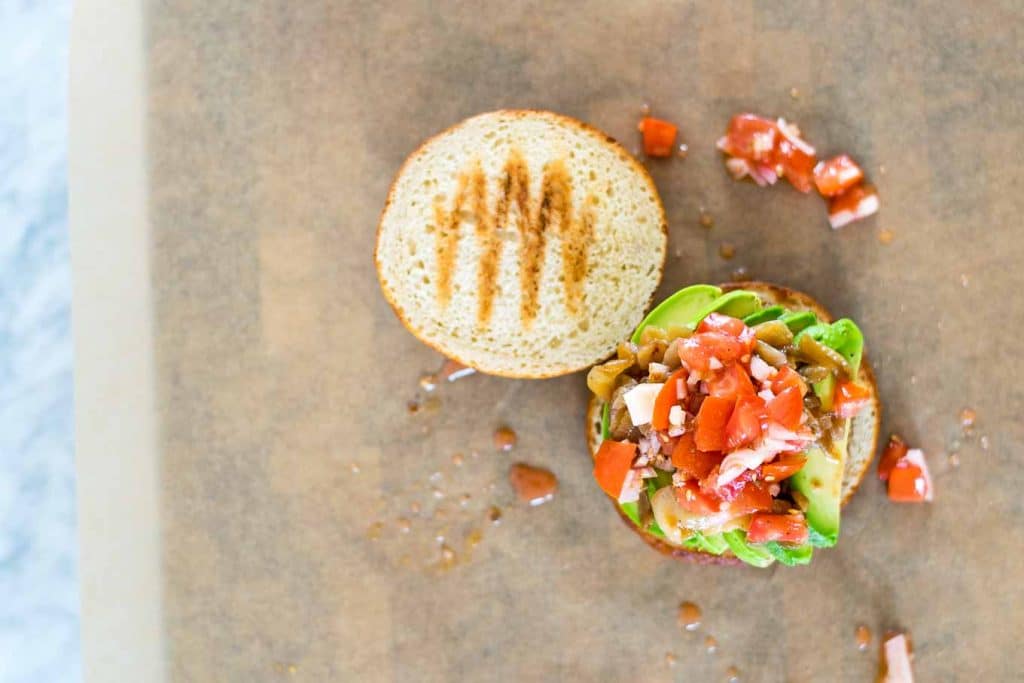 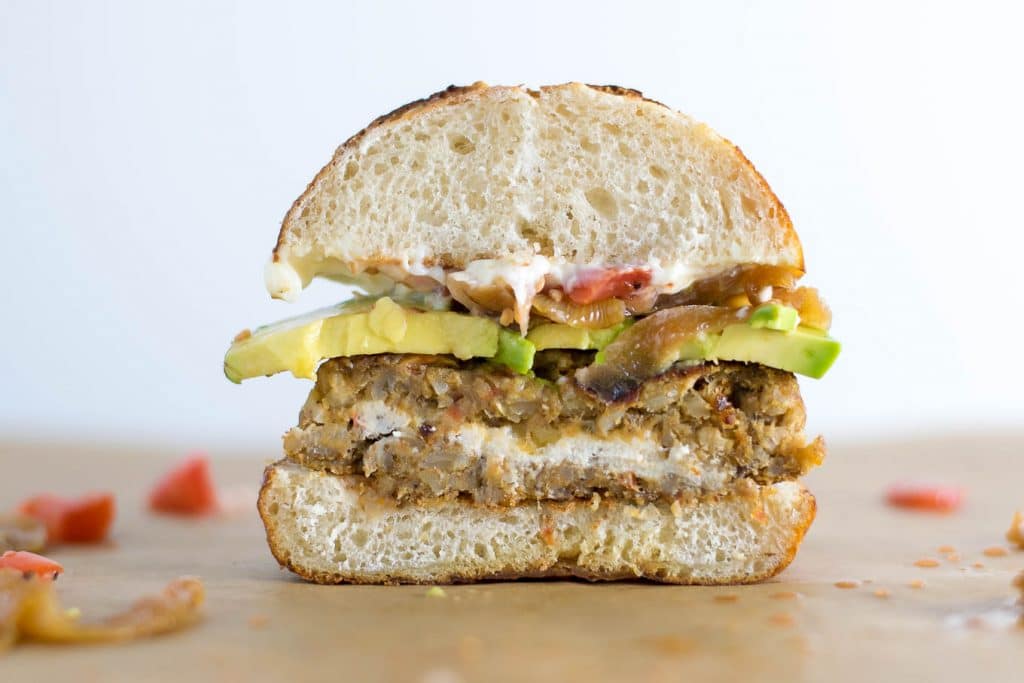 I really loved eating these stuffed mediterranean veggie burgers and I love that the recipe makes *15* of them. That’s plenty for a party or for having lots of leftovers (maybe even both)! They’re best when baked a day in advance, allowing the gluten time to relax for the optimal texture. After which, a quick pan fry or turn on the grill makes them ready to serve in minutes! See? Perfect party food.

They’re wonderful topped with the marinated tomatoes, though those also make a tasty side dish! These burgers seriously bring me back to visiting Greece with all that fresh flavor. We also topped the burgers with some sliced avocado and caramelized onion. I’m positive my husband Omar also added jalapeños to his.  And we ate them with freshly baked homemade pretzel buns! Serious burger heaven.

Let me know if you make these veggie burgers! I love seeing & hearing about it when you guys make my recipes! Leave a comment and/or rate the recipe below, tag me on Instagram (or #thecuriouschickpea), share with me on Facebook! 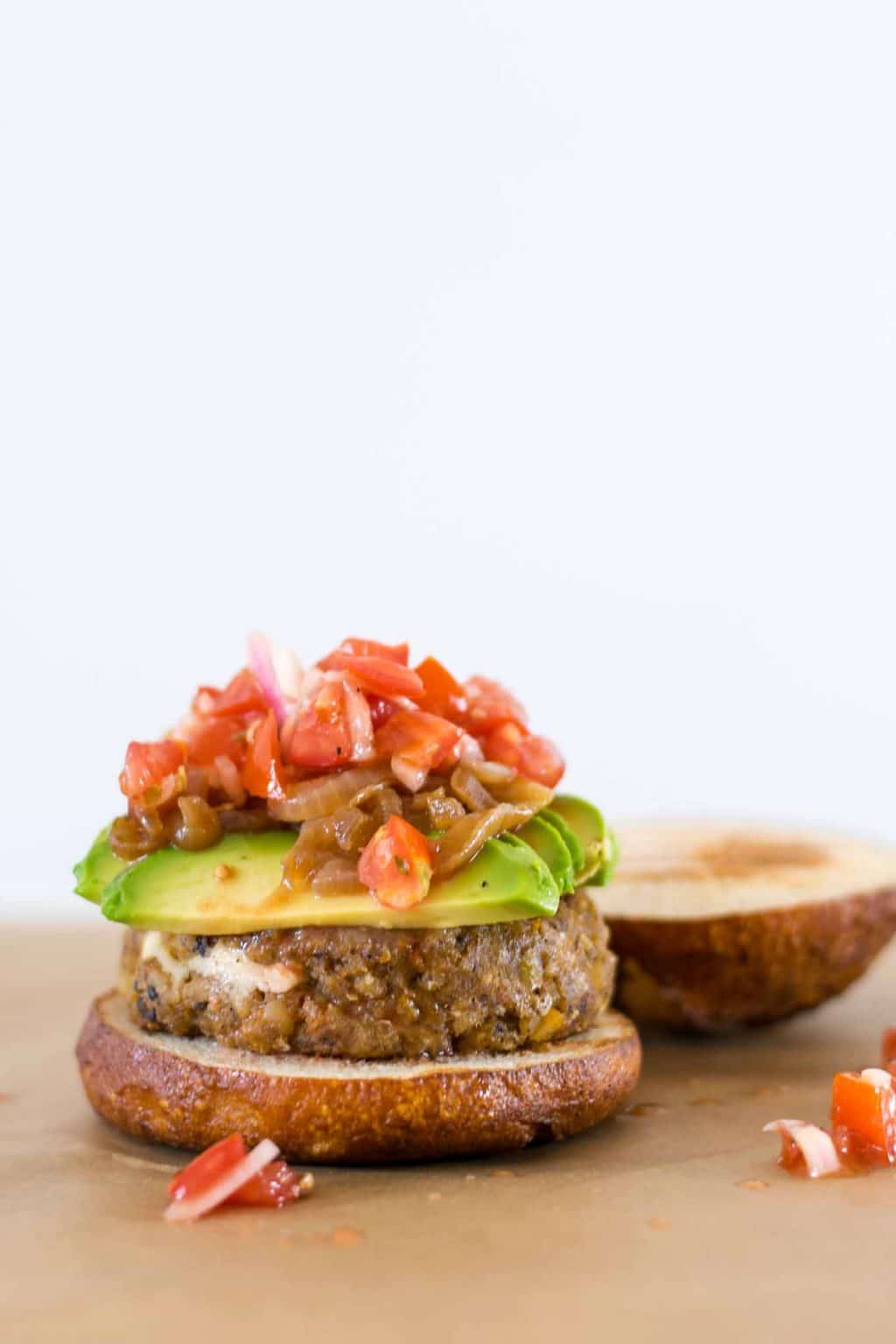 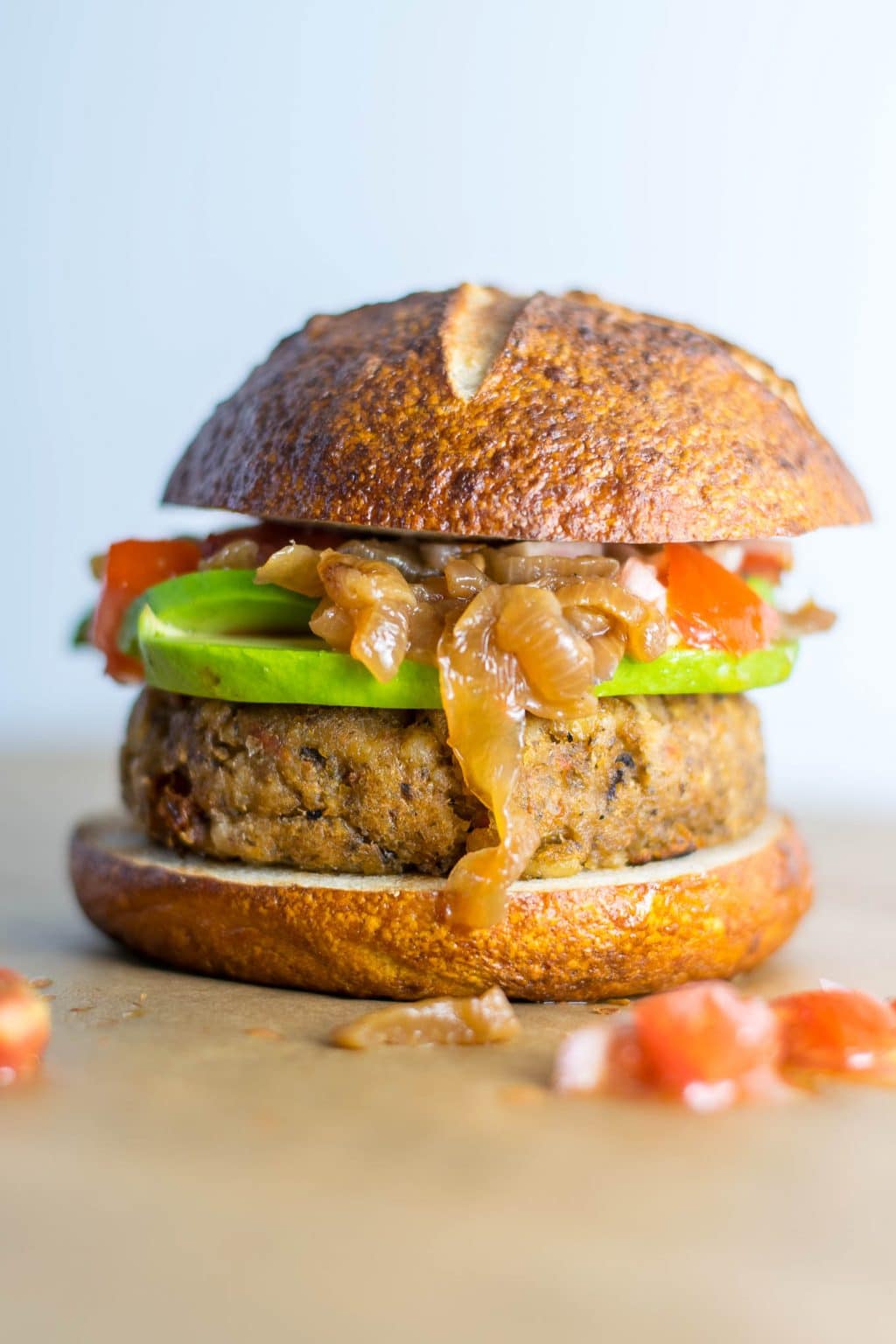 To make the stuffed mediterranean burgers:

To make the marinated tomatoes:

We are the same way, turning on the oven in 90-degree heat hahahaha! Our latest recipe was a lasagna, ain't no stopping us! This recipe looks great, definitely adding to our list. I'll comment back when we make!!!

Ahhh haha I really just can't help myself. Well your lasagna looked delicious and 100% worth it :)