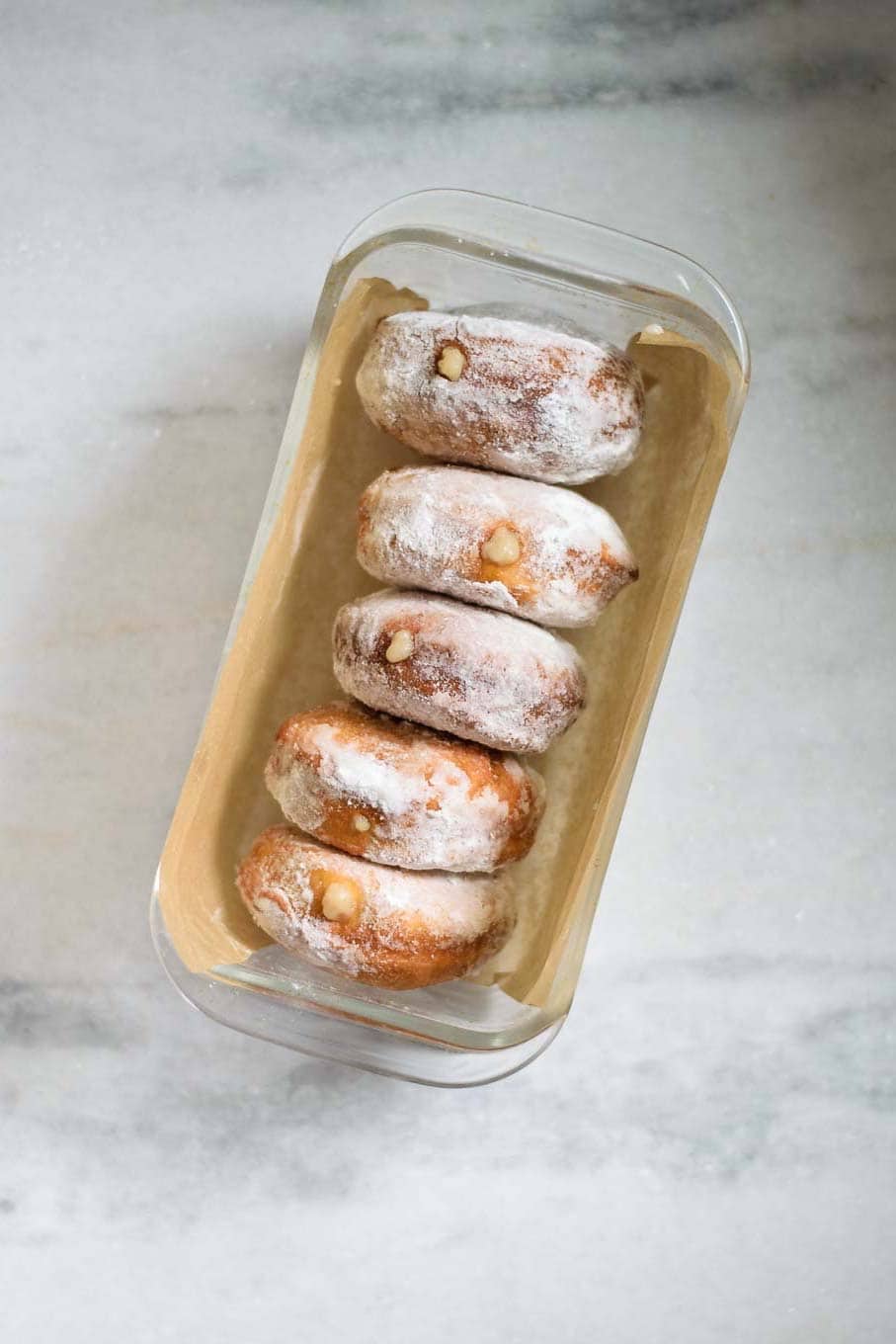 Calling all doughnut lovers! These doughnuts are everything you want your doughnuts to be. Or at least, everything I want in a doughnut. They are yeasted and fried. No baked or cake doughnuts here! They are light and airy inside, with a bit of a chew. Eaten while still warm, they practically melt in your mouth. If you’ve never had a homemade doughnut before you are in for a treat! These doughnuts are filled with a coconut ginger custard that’s so delicious you could just eat it with a spoon. Which, you can do, because the recipe definitely makes extra!

You shouldn’t be intimidated by making doughnuts. It’s super easy, and this recipe only requires a few minutes of kneading! You could even do it in a stand mixer, but kneading by hand will help you feel if you need to add more flour or not. The doughnuts are ready about an hour and a half (if it’s very cold in your kitchen it might be closer to 2 hours) after you get a hankering, which is pretty quick in the world of yeasted dough!

Doughnuts are made using an enriched dough. Enriched doughs are made with milk instead of water, have fat and eggs in the dough, and often include sugar. This is why vegan doughnuts are few and far between at doughnut shops. But it’s not difficult to make them! Substitute a non-dairy milk (my milk of choice is soy, but almond or cashew or whatever will work as well) and use a vegan butter or just some neutral flavored oil. For the eggs I have substituted aquafaba, which is the liquid left from cooking beans. It’s what you normally dump down the drain! Aquafaba makes the most perfect soft and tender dough which turns into the best doughnuts when fried. [Did you make my Thai curry cauliflower red lentil soup yet? Save the liquid from that can of chickpeas you opened and voila, you have an excellent excuse to make doughnuts (and pairing them with a healthier meal might make you feel better about eating several doughnuts in a day)!] 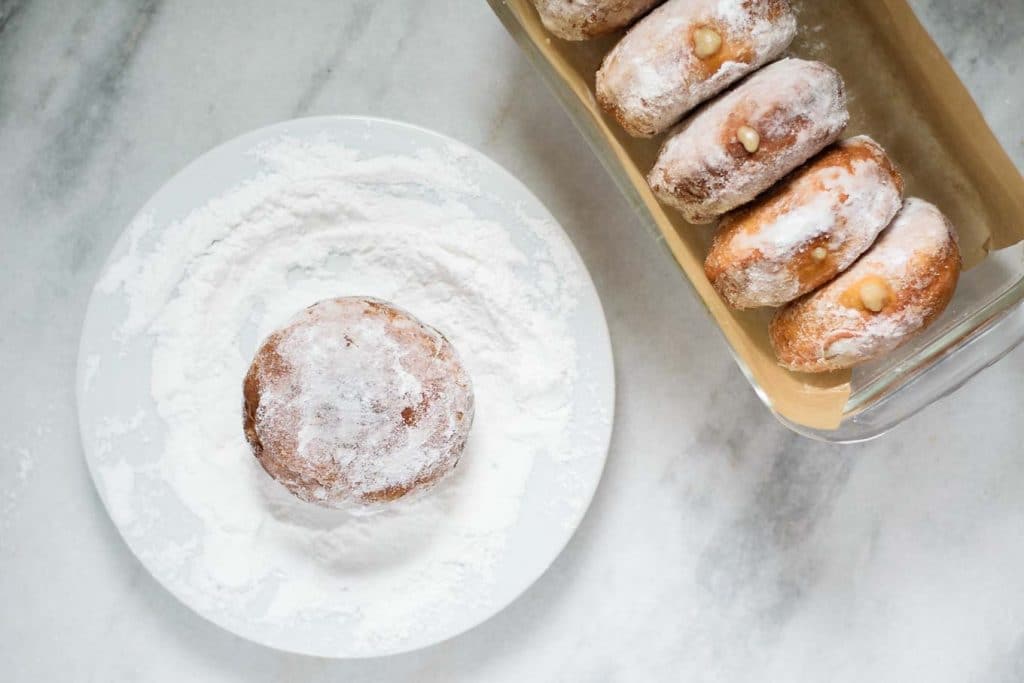 Enriching dough with fats slows down the proliferation of the yeast, which means that the dough will be slower to rise. To offset this, doughnuts use more yeast than you’ll notice I use in my various bread doughs and pizza dough. It also helps that there’s plenty of flavor in the dough already, so doing a slow overnight rise in the refrigerator (which helps develop flavor from the yeast) is not necessary.

Deep frying also doesn’t need to be scary! Get yourself a cooking thermometer that goes up to at least 400 ºF, and add a couple inches of oil into a large heavy bottomed pot. A big soup pot works perfectly for this purpose! Heat up the oil slowly over a lower heat so you have a stable temperature and so can make small adjustments towards the end until you reach 350 – 365 ºF, but not hotter than 375 ºF. If your oil is too hot, the outsides will cook too quickly while the inside remains raw. You’ll fry them about 1 minute on each side until they’re a dark golden. I find that they get a little lighter in color as they cool. Use a spider strainer spoon to flip and lift the doughnuts out of the hot oil.

You can fry without a thermometer, but it requires a little more intuition and experience. It’s even more important to heat the oil slowly over a lower heat. When you think it’s hot enough, test the oil with a small piece of dough. When the oil is at the correct temperature and a piece of dough is gently dropped in it will drop down then immediately float and little bubbles will form around the dough as the oil boils. Watch that the dough doesn’t darken too quickly,  which would suggest that the oil is too hot. And if it takes too long to brown, it isn’t hot enough. 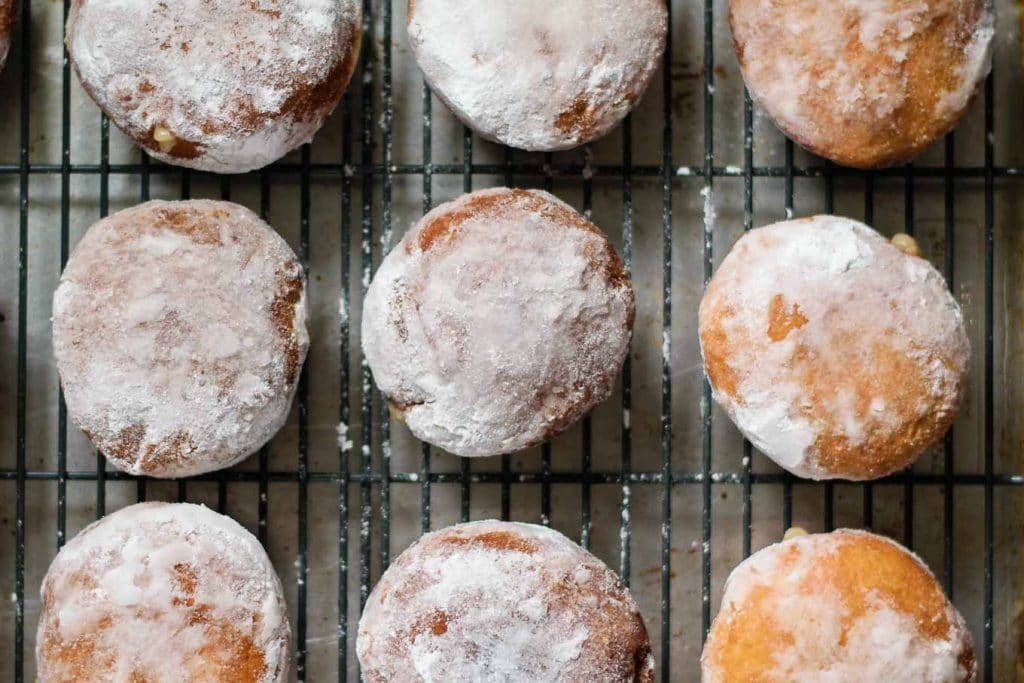 Now that you know all about the dough and frying part of these treats, I’ve got to tell you about how incredible this custard is! First of all, I’ve apparently completely missed out on the raging debate between custard and cream filled doughnuts! I can’t tell you where I fall on the spectrum because until recently I had 0 interest in stuffed doughnuts at all. So, I’ve actually never heard anyone bring this up, but my husband Omar claimed it’s a thing while eating doughnuts over the weekend (and apparently he falls firmly on the custard side of the debate). Well whatever you’re into, you should definitely give this custardy filling a try! It’s so easy to make, and is ready in just a handful of minutes!

Lightly sweetened coconut milk with warming vanilla and a double dose of spicy ginger–all thickened up with cornstarch! Ground powdered ginger is hydrated in some warm water so that it’s flavor really pops! And on top of that, there’s a splash of fresh ginger juice, which you may be able to find in the international section of your grocery store (I did!), though I also provide some basic instructions on how to make it at home under the recipe. Coconut milk tempers the bite from the ginger and makes for the creamiest custard. A squeeze of lemon is added at the end for a bright and citrusy finish.

These doughnuts are so delicious and made even better when filled with the coconut ginger custard. Just beware, if you make these, you might end up eating 3 in a day! I may or may not know this from experience. I hope you try making these doughnuts, but if you do and find yourself eating many of them, you can’t say I didn’t warn you! If you do try the recipe, or have any questions about it, let me know! Leave a comment and/or rate the recipe below, tag me on Instagram (or #thecuriouschickpea), or share with me on Facebook! Happy eating! 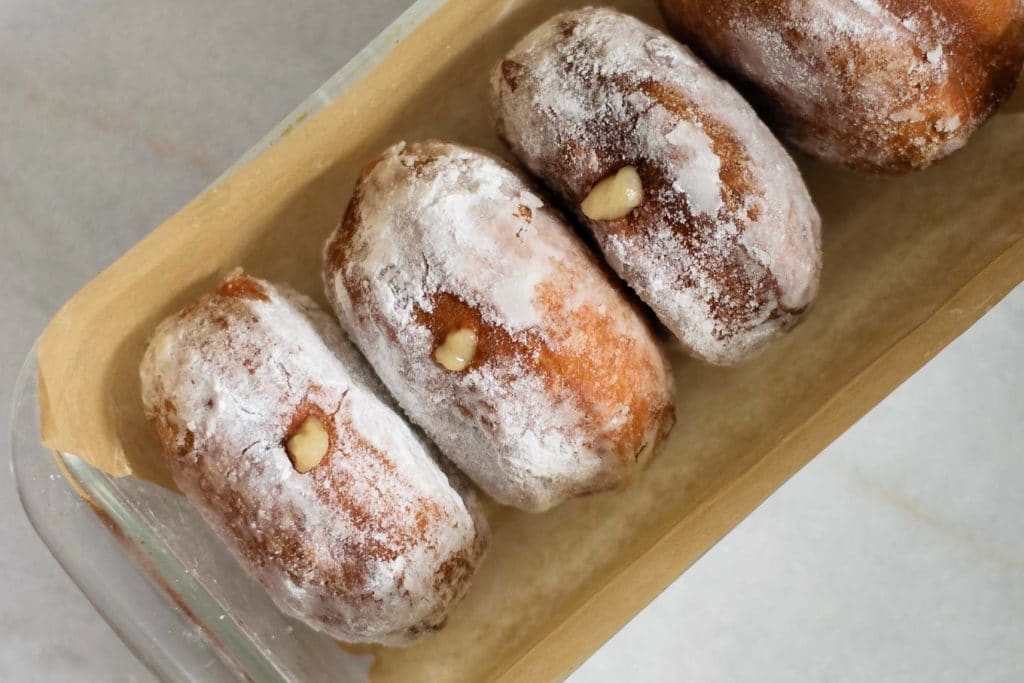 To make the doughnuts

To make the coconut ginger cream

*You can use store bought powdered sugar (confectioner's sugar) to coat, or you can grind your own granulated sugar in the blender until fine. In the photos I had ground my own sugar and it's slightly coarser than the store bought variety of powdered sugar.

*Ginger juice can be purchased at the store or prepared at home. To prepare at home, add about 4 tbsp of coarsely chopped ginger and about 1 cup of water to a blender and blend for a minute or two (or longer depending on the strength of your blender) until relatively smooth, then pour through a cheese cloth layered fine meshed strainer. Gather the cheese cloth and squeeze the juice out of the ginger pulp.

How would you go about storing these? They look so yummy but I know my dad (who is vegan; the rest of the family isn't) won't be able to eat them all in one day :)

I haven't done this myself, but to store extra doughnuts not consumed the first day I would freeze them. Hopefully the rest of the family will help your dad out! Doughnuts are delicious, vegan or not :)