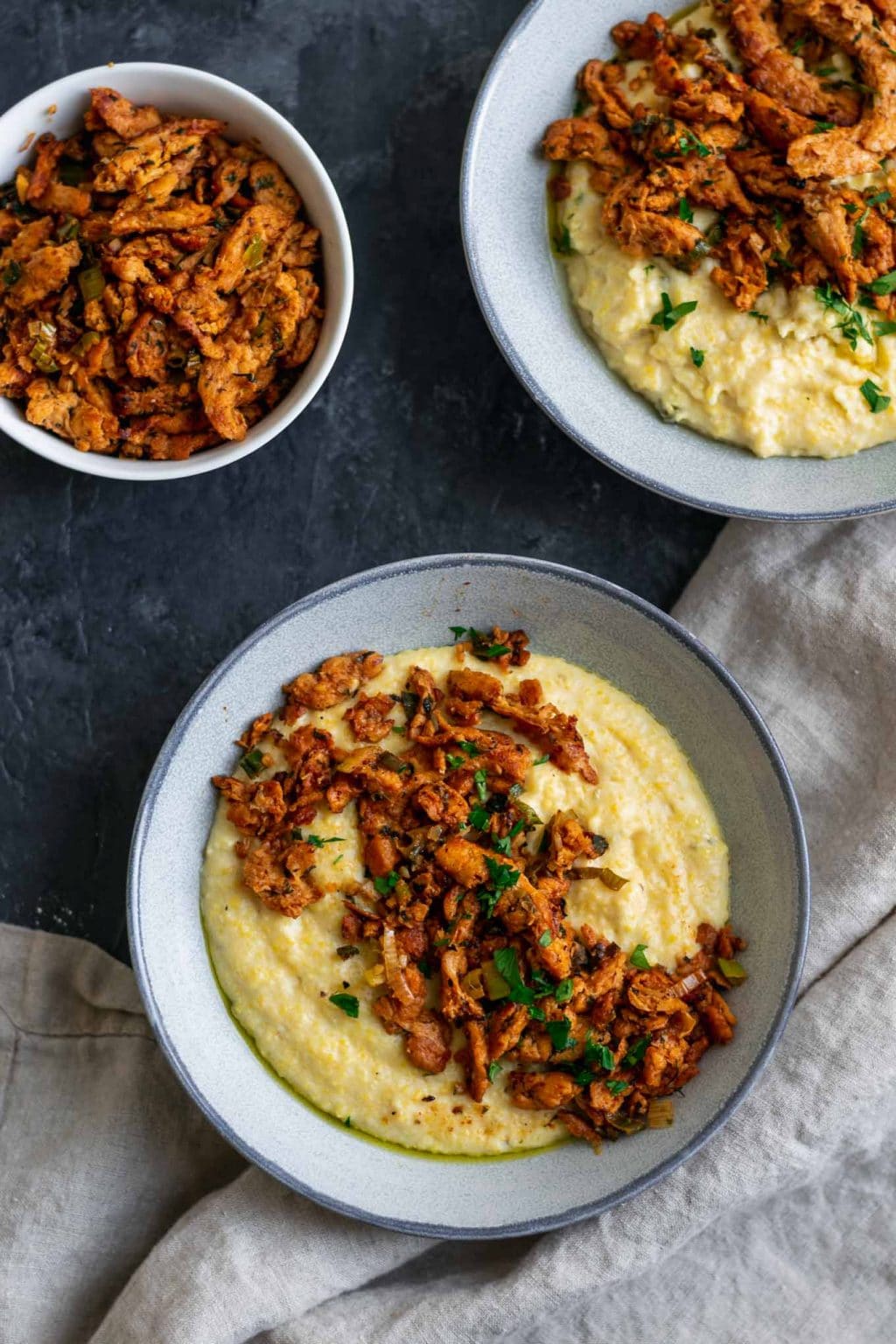 This recipe is brunch goals. The creamiest grits. Chewy soy curls seasoned with mouth watering cajun spice. Paired together it is the ultimate comfort food. Admittedly, this isn’t the quickest recipe to make, because to it takes a good chunk of time to make grits properly, but it’s so easy! Grits just need an occasional stir as they cooks to avoid clumps and keep them from sticking to the pot. If you’re looking for something pantry friendly, easy to make, gluten free and vegan for brunch then this recipe is for you! That being said, don’t be limited by the brunch title, this makes a seriously delicious dinner entree as well.

When it comes to grits, they need to creamy and tender. A long simmer makes sure of the tender and soft texture. Thick cashew cream takes care of the creaminess (substitute canned coconut milk or unsweetened soy cream to make it nut-free). And don’t forget the jalapeño because jalapeño grits are always better than plain grits. Right?

Grits are made of dried corn that have been stone ground to a coarse texture. It’s cooked to make a thick porridge and is a Southern United States staple. If you’ve ever eaten soft polenta it’s quite similar, differences seem to depend on what article your google search takes you to (apparently). That being said, general consensus is that grits are made with a very coarse ground white corn while polenta is more commonly made from a yellow corn and can be ground more finely [there’s some interesting history on grits vs polenta in this article if that’s your thing]. 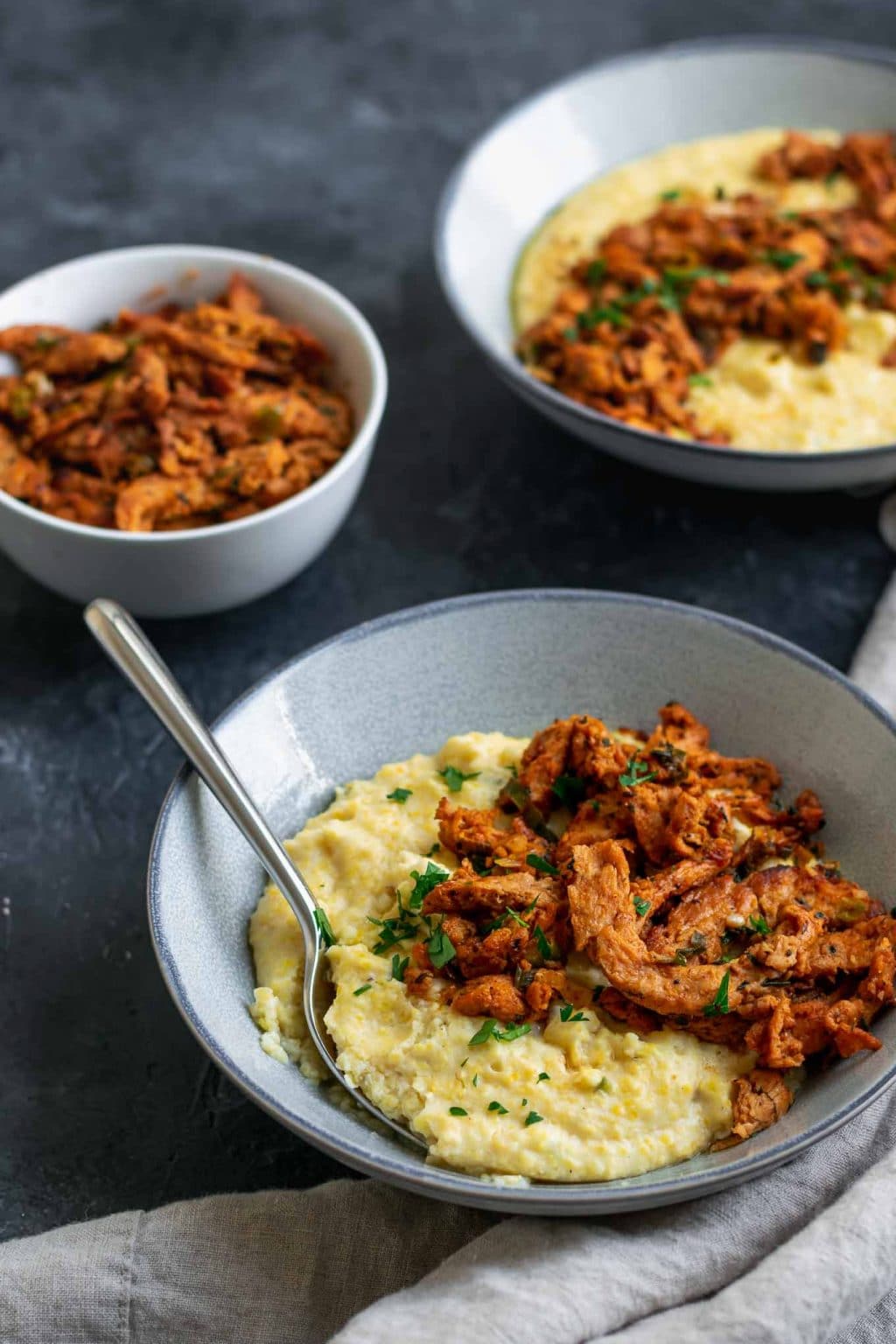 It is possible to find quick cooking grits, or “instant” grits, and in some places that might be more easily found than the whole grain version I used in this recipe. These grits cook faster because they are polished, removing the hull and germ. If you use quick grits you should follow the cooking times listed on the package. That being said, stick with the good stuff if you can for a better final texture (+ the extra fiber and nutrition!).

I guess you can think of this as a veganized shrimp and grits, but I don’t like to because shrimp give me the heebie jeebies. Ya know. So, I’m not trying to make a vegan shrimp here, but instead am doing a spin off on the flavor profile. Cajun spice, garlic, green onions, parsley, smoked paprika, and a squeeze of fresh lemon combine for the most delicious blend of flavors. Soy curls are a yummy gluten free and vegan protein (you can buy them on Amazon) and are essentially TVP in a larger shape. 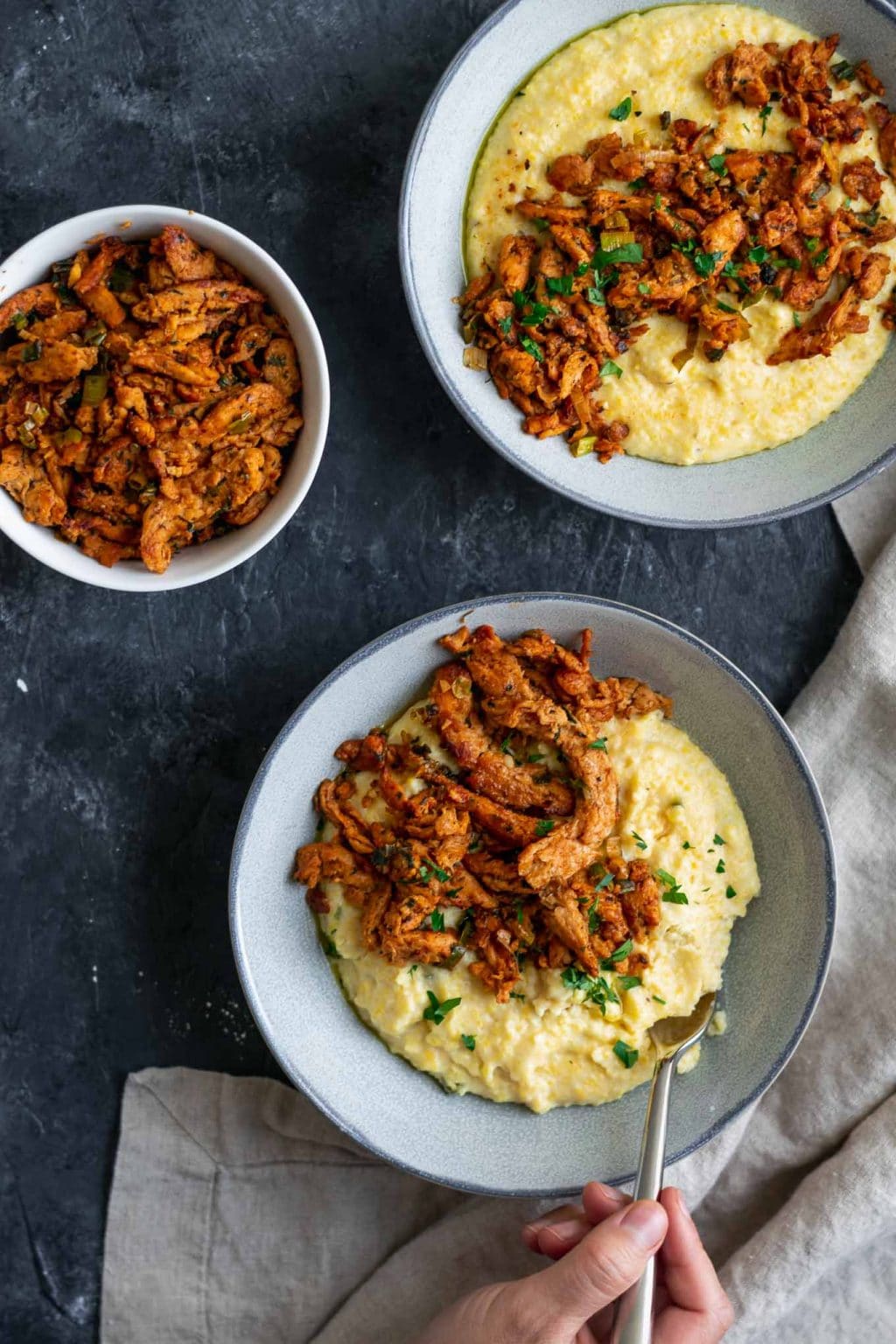 Soy curls need to be hydrated with boiling water, then you’ll want to squeeze out as much as that water as possible. They’re then able to fry up chewy and even crispy and soak in any liquid that you add. You can substitute seitan or your favorite vegan chicken. They will not soak up the broth the way that soy curls with, but that’s fine–a brothy topping over the grits is yummy, and sometimes the goal.

I made my own cajun spice blend, and you can find the recipe for that in the notes below the main recipe. Substitute a store bought spice blend if you’d like. And for the near future I think I’ll be adding that spice blend to everything. It’s real good!

Let me know if you make these cajun soy curls and creamy vegan jalapeño grits! Leave a comment below, tag me on Instagram (@thecuriouschickpea or #thecuriouschickpea), or share with me on Facebook. Enjoy your vegan grits!

If you end up buying the 6 pack of soy curls from amazon (and you probably should) and need more soy curl recipes, I’ve got more for you here! 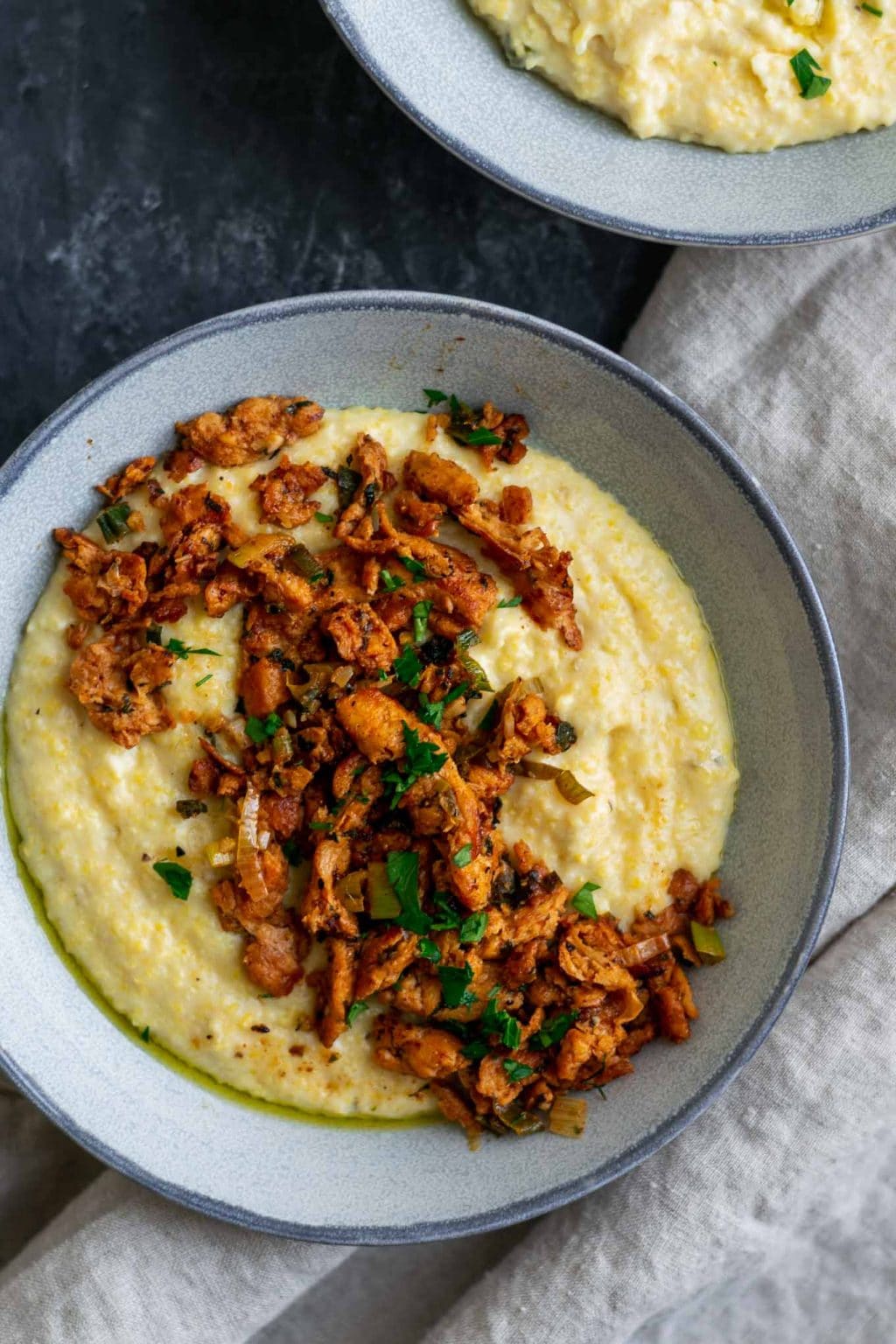 *Make cashew cream by blending 1 cup of cashews (soaked for 30 minutes in boiling hot water, then drained, if not using a high speed blender) with 1 cup of water. Or substitute an unsweetened non-dairy creamer.

This is one of my favorite recipes for polenta. Very tasty. I would not have thought of using Cajun spices!

This looks great! One suggestion, though - because my south-Louisiana-born self can't resist! If you want a more authentic Cajun flavor, instead of garlic + scallions for the base, start with a combination of onion + celery + bell pepper, then the garlic and add top with the green part of the scallion when serving. Onion + celery + bell pepper is the "Holy Trinity" of Cajun cuisine. (I hope you don't mind the suggestion! Thanks for showing a little love to Cajun cooking!)

I love soy curls! They are not like TVP (made from soy flour) but the whole beans so no processing other than drying. I have found they taste even better if I soak them in vegan chick'n stock instead of just the water. Just bought the bulk box (12 pounds!) of them to split with my daughter... so we will be eating lots of soy curls for sure. As long as you keep them in a freezer they last for ages. Cheapest price I found for the bulk was direct from Butler Foods in case anyone is interested.

This was delicious and satisfying. I cant wait to try different spice combinations.

That's great to hear, so happy you enjoyed the recipe! Thank you for reporting back!