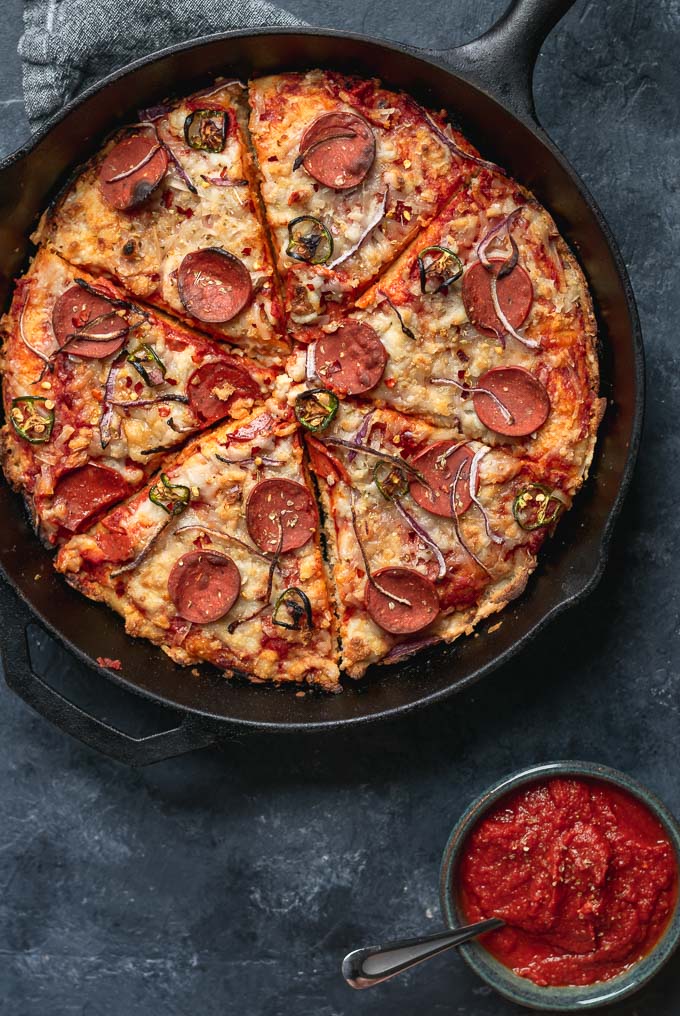 You need this vegan pepperoni pan pizza in your life. Like, yesterday already! What are you waiting for?!

Look, thin crust pizzas are great and all, but sometimes you need a thick crusted pan pizza. We’re talking an entire inch(-ish) of deliciously doughy crust underneath generous toppings. There’s no need to go light on the sauce, [vegan] cheese, or anything else you want to throw overtop as there is plenty of crust to support it!

Take this vegan pepperoni pan pizza. A super easy soft dough can be easily made by hand or in a stand mixer. It’s loaded with a delicious homemade pizza sauce, plenty of vegan mozzarella, vegan pepperoni, fresh sliced jalapeños, and red onion.

It’s an unassuming pizza, comforting and homey, and oh so satisfying. Growing up in the midwest thick crusted pizza was almost as common as it’s thin crusted cousin. But whether or not this is a nostalgic food for you, you should get on making this mouth watering pan pizza! 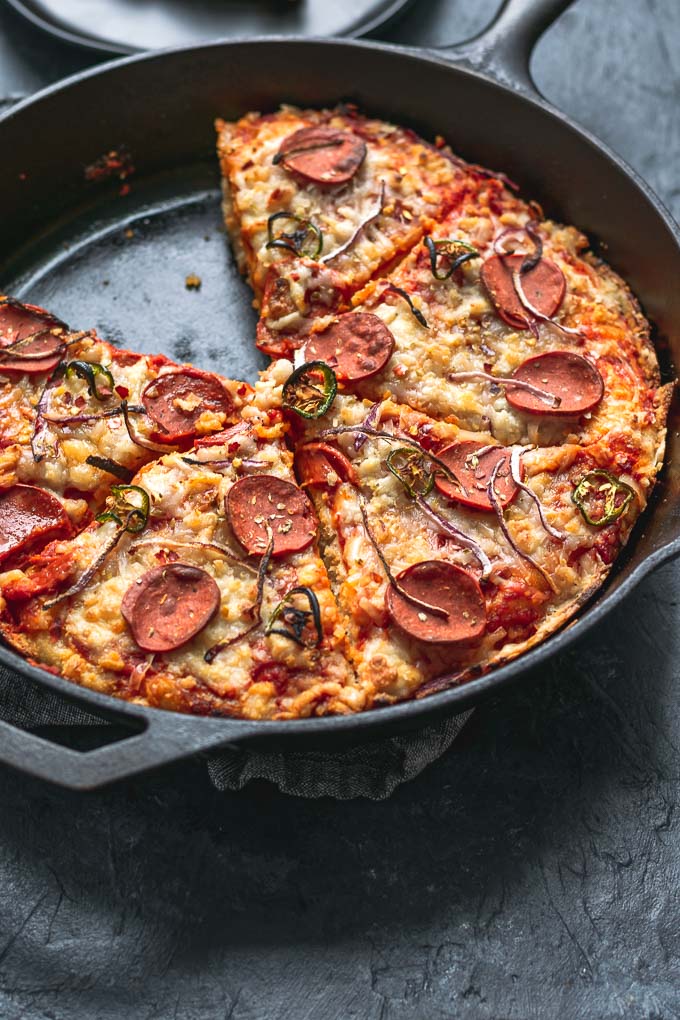 Right, so first we make the dough. This dough can be made with either bread flour or all purpose flour. I tested it with both to make sure! 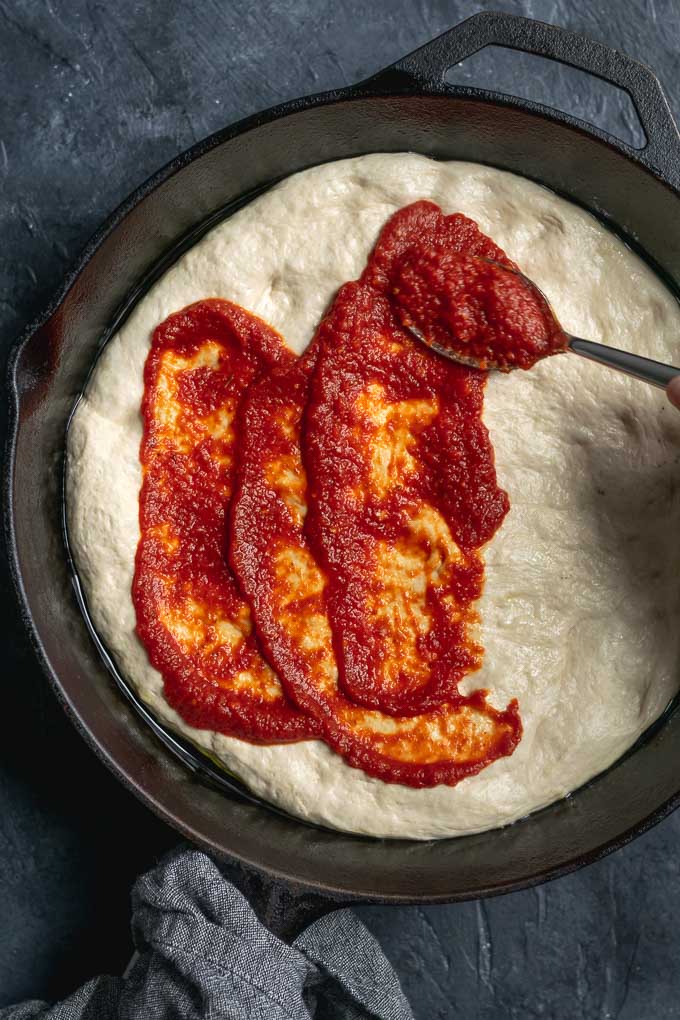 When making yeasted doughs, I prefer to use instant yeast. Instant yeast is different from dry active in that it can be added directly to the dry ingredients. It also starts activates a bit quicker than dry active yeast.

If you only have dry active yeast on hand, don’t worry you can still make this dough! Just stir in the yeast to the warm water and let it activate for about 5-10 minutes before mixing it into the dough. You will also need to give the dough a bit longer to rise under the same environment, just keep an eye on it!

This dough needs about 1 1/2 to 2 hours to rise with instant yeast. In the summer heat, I’m looking at the lower end of this range. In a cold house it might take the full 2 hours. I personally don’t like to rush my dough during the rise, as this is when the flavor develops.

While the dough is rising is the perfect time to make the pizza sauce. Now, if you want to buy pizza sauce, that’s cool I guess, you can skip this step. But pizza sauce is so easy (and cheap!) to make, and you really can’t beat homemade. 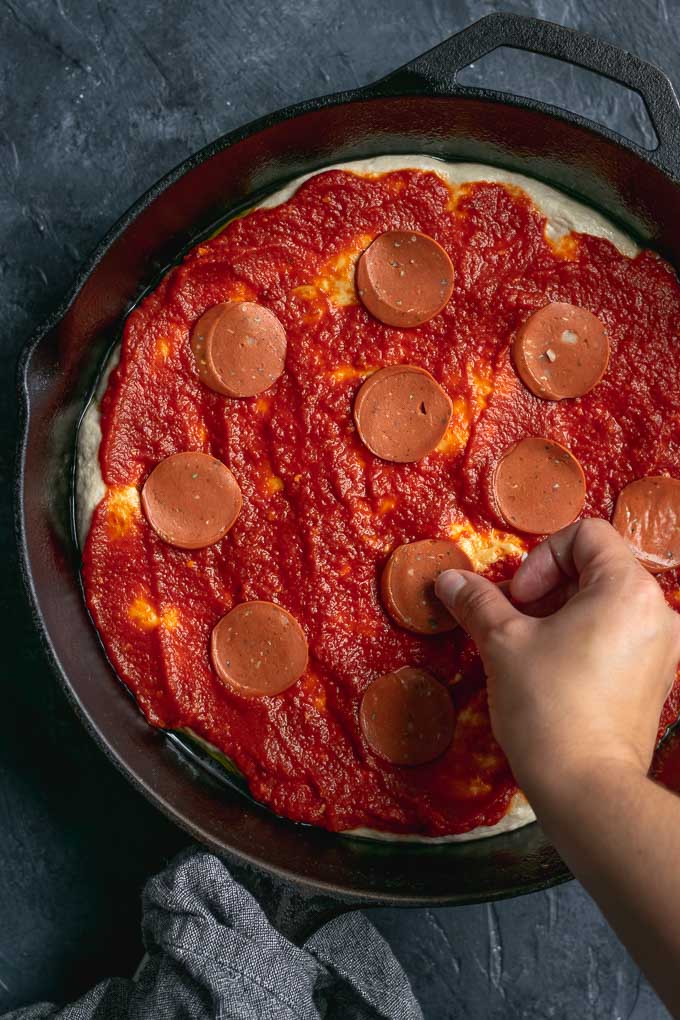 While I typically make an uncooked red sauce (like the one in my vegan meatball pizza) for my thin crust pizzas, this style of pan pizza goes perfectly with a simmered tomato sauce with its deeper, sweeter flavors.

This pizza sauce is herbed with dried oregano and spiced with dried granulated garlic and dried onion powder for their sweetened lightly caramelized flavors. Fresh garlic gives a double dose of nuanced garlicky flavor, and olive oil adds depth of flavor and richness to the sauce.

A sprinkling of sugar is totally optional, but rounds out the natural sweetness of tomatoes (plus you never know when you’ll run into slightly more astringent tomatoes). And speaking of tomatoes, you’ll want to choose high quality canned/boxed/jarred tomatoes. Canned whole tomatoes always work and tend to be the best quality tomatoes, but crushed or diced work too! The tomatoes in your pantry are the ones to use here! 🙂

The pizza sauce is simmered for about 30 minutes to allow all the flavors to meld and mellow. It brings out the sweetness of the sauce and that delicious tomatoey flavor. 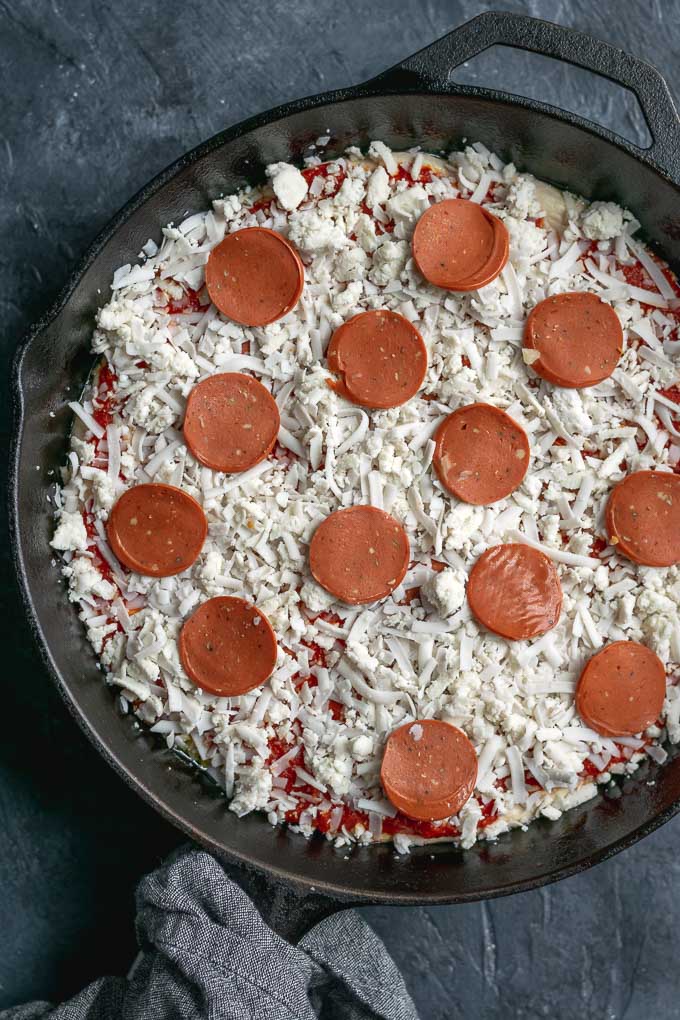 Once the dough has completed it’s rise, it’s time to transfer it to the skillet or pan that will be used for baking. But first, preheat the oven. You want to take it to 550 ºF (285 C) or has hot as your oven will go. Also move a rack to sit in the bottom 1/3 of the oven. If you have a baking stone or even better, a baking steel, set it on that rack to pre-heat.

Grease your skillet or pan: drizzle in a bit of olive oil and spread it to coat the bottom. Next, ease the dough into the pan. Gently stretch the dough to fill the bottom of the skillet.

If/when the dough resists don’t force it, but let it rest for several minutes. This gives the gluten (protein network) a chance to relax, and when you come back it should easily stretch to fill the pan. But repeat as needed! 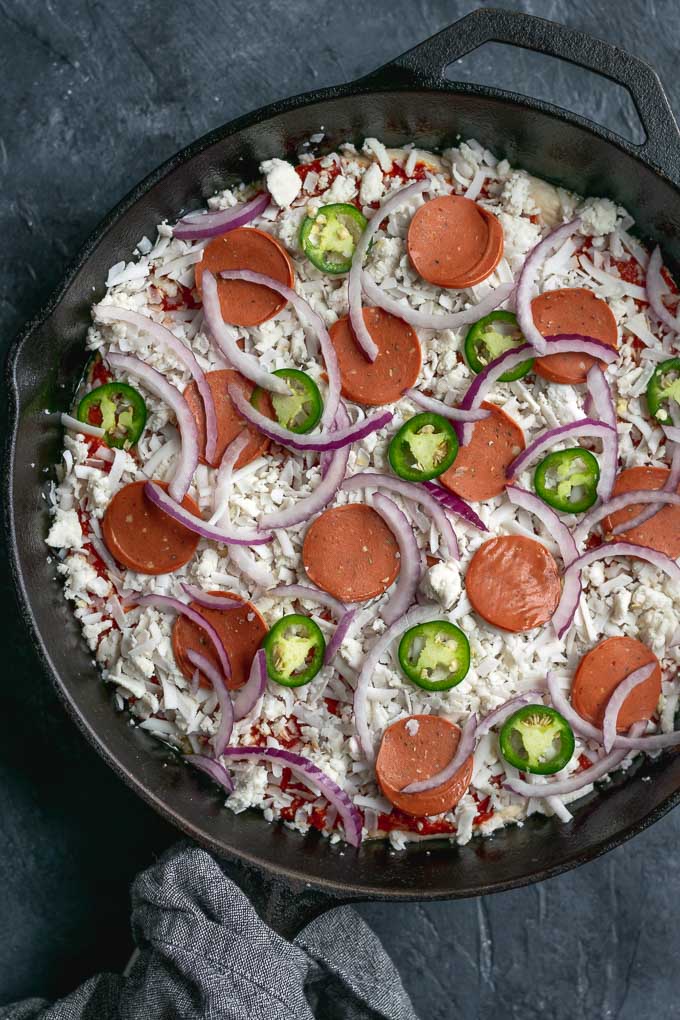 Let the dough rise for a second time once fitted to the skillet (cover so it doesn’t dry out). This can happen while the oven preheats, or about 30 minutes.

Once the dough has risen for a second time, spoon over a generous portion of sauce. This isn’t like thin crust pizzas where you have to worry about the dough being soggy and the delicate crust supporting the weight of the toppings. Go big with this pan pizza!

Now this is the way I like to do the rest of the toppings: vegan pepperoni, vegan mozzarella (also more generous than I normally would go with the cheese!), more vegan pepperoni, sliced jalapeños, then lots and lots of thinly sliced red onion. Like, I was a bit too skimpy with the red onion on this pizza, if we’re being honest.

If you want to top your pizza differently, then you do you! 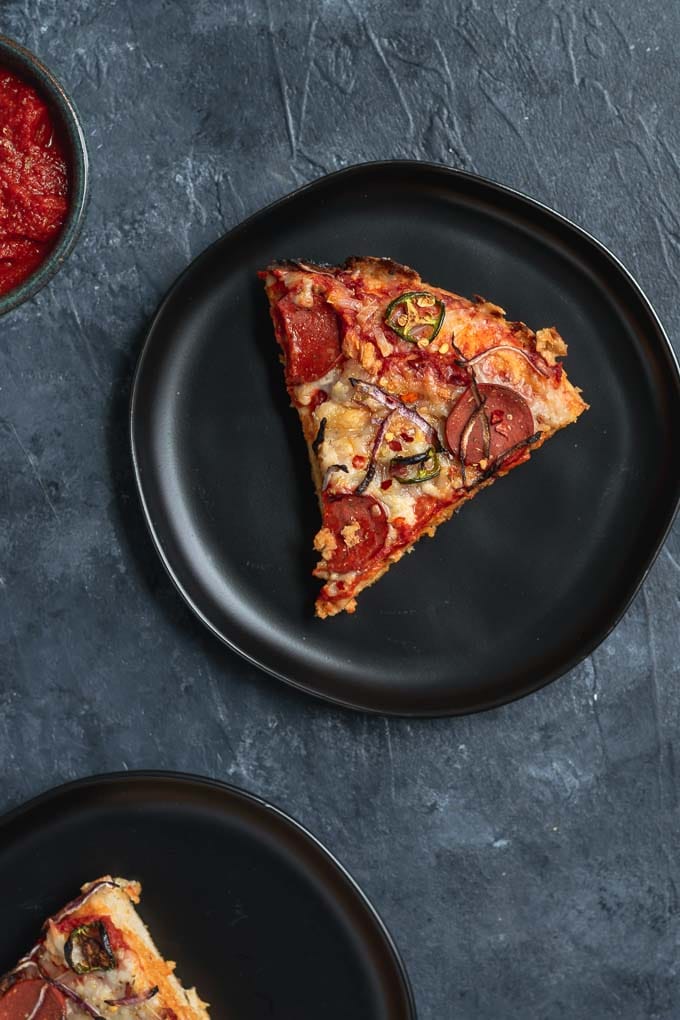 You can always make your pizza ahead of time. There are two convenient points to pause the making of this pizza. After stretching the dough into the pan, it can be tightly covered and popped in the fridge for a slow second rise.

You can also completely top the pizza, then cover it and stick it in the fridge. At either point, the pizza can hang out in the fridge for up to 24 hours. Stick it straight from the fridge into a preheated oven to bake.

The bottom crust will turn a beautiful golden brown and have a delicious buttery flavor (especially thanks to that olive oil it cooks in). In your super hot oven, this pizza cooks up in about 12-15 minutes. But give it the time it needs for a golden rim–if there’s deep caramelization happening around the edges, even better! 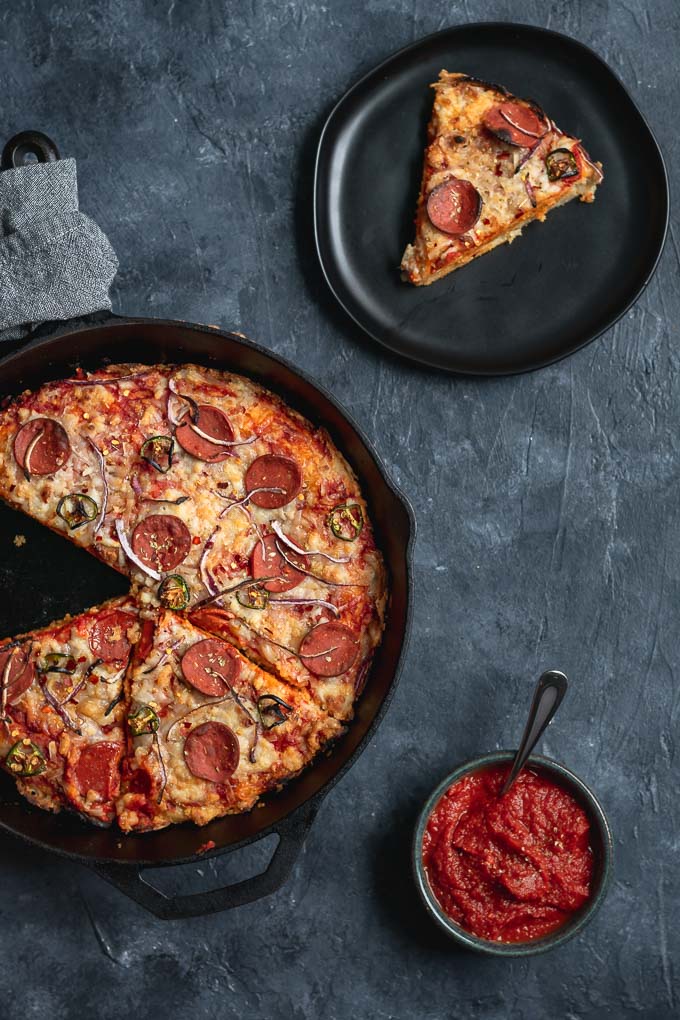 With vegan cheese, you may find it needs a bit of extra help from a more direct heat source to get perfectly melty and browned. So once the crust is looking great, move the pan about 6″ or so from the broiler and turn the broiler on.

The concentrated heat will brown your cheese in a couple of minutes and make for a perfect pizza!

Enjoy your pizza hot (I mean, give it a couple minutes before cutting into it) sprinkled with dried oregano and crushed red pepper. Just a warning, once slice of this pizza is a lot more filling than one slice of your average thin crust pizza! And trying not to over indulge is hard, because it’s so damn good! 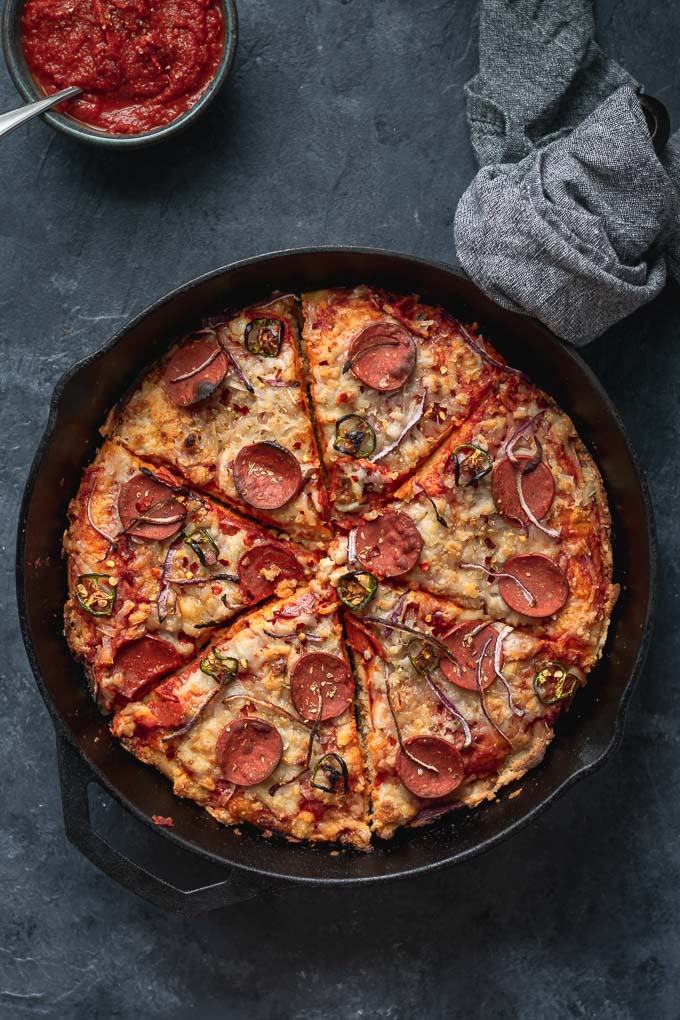 So next time you’re not in the mood for thin crust pizza, make this one! It really doesn’t get any better!

If you make this recipe, leave a comment and rate it below! And don’t forget to tag your recreations @thecuriouschickpea and #thecuriouschickpea on Instagram! I love seeing your photos! Happy pizza-ing friends!

Prep time is mostly inactive and varies depending on how long the dough takes to rise. 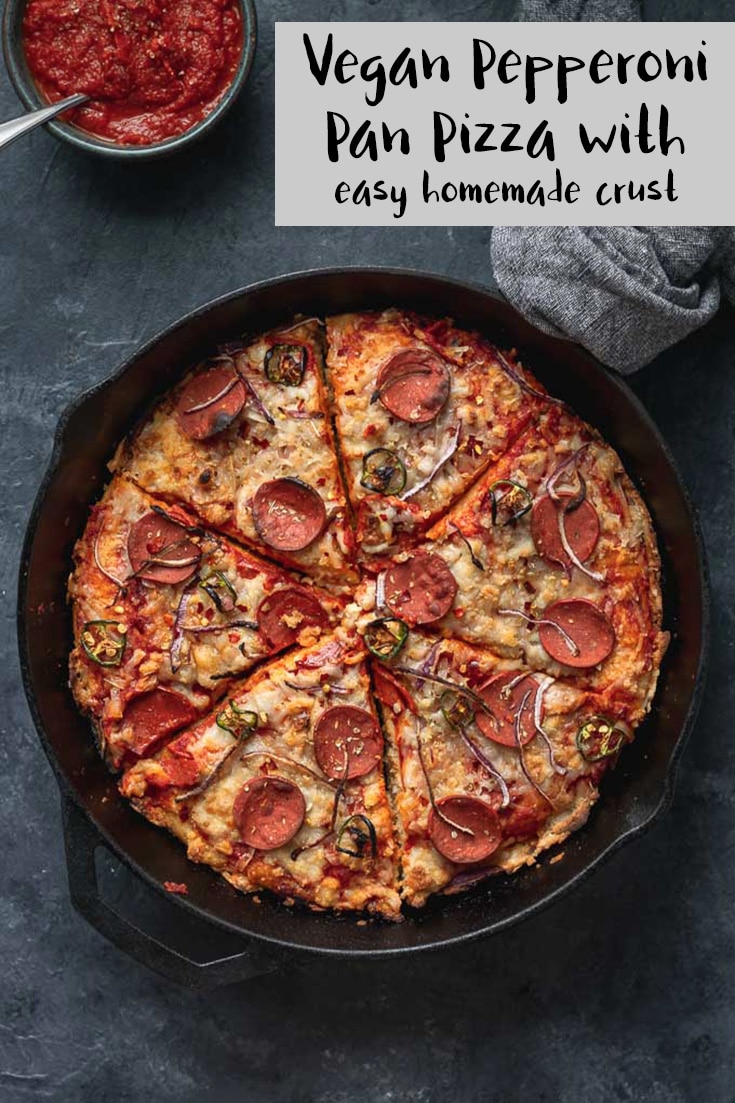 I have to tell you, I’ve been trying to find a pan pizza dough recipe that tastes like Pizza Hut for many years now. You NAILED it! And it’s so simple!!! I added a drizzle of maple syrup in the beginning and it was perfect, super crunchy crust but really thick and bready. I used the vegan liquid mozzarella so I had to drop the temp to 525 so it wouldn’t burn but it was still perfect. Best pizza I’ve had since going vegan. The pizza gods and my tummy thank you so much for this!

Wow this is the ultimate homemade pizza recipe! Will definitely be making it for a Friday treat sometime soon :)

Thanks Maria! I hope you enjoy it as much as we did! :)

I had takeaway pan pizza last night and it was no where near as good as this looks!!!