This Sindhi vegetable biryani is a popular and traditional dish, with layers of spiced vegetables and chickpeas and basmati rice. It’s a delicious recipe, and extra special! Give this vegan and gluten free recipe a try! 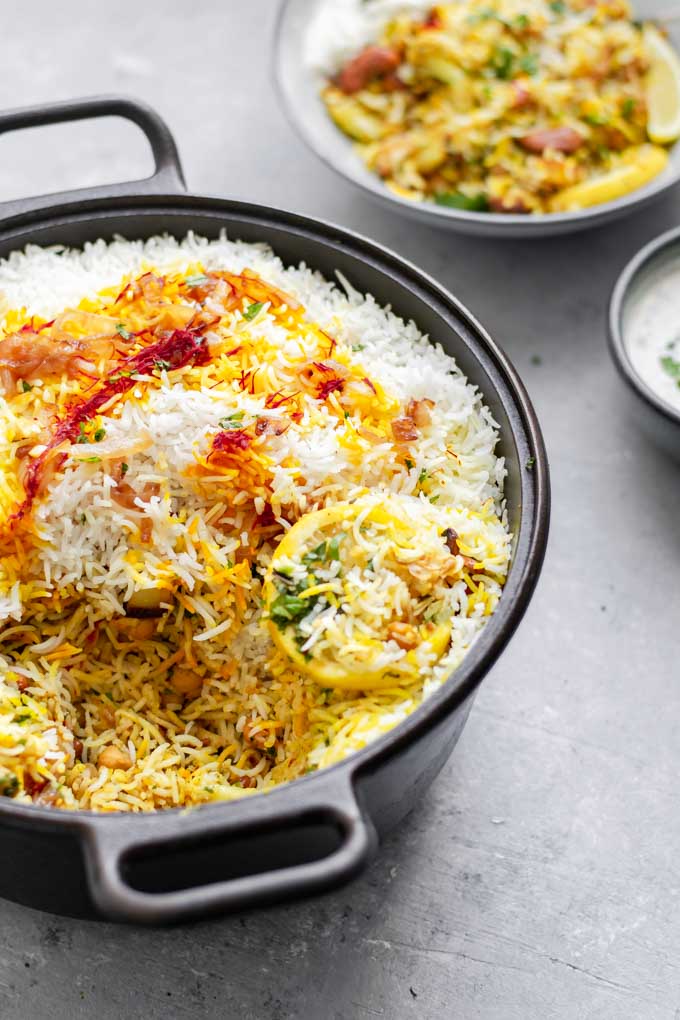 When it comes to Indian food, Biryani is in a class of it’s own. A spicy curry marinated filling, saffron kissed rice, fried potatoes, toasted nuts, and fragrant herbs come together in layers to make something so special it’s been named the food of the gods. With this recipe I’m bringing you a version from my own heritage, Sindhi vegetable biryani.

I will admit right here that biryani is not the simplest recipe. There’s a long list of ingredients (which I’ve done my best to refine for you), and there are multiple components to it. But it’s also not a difficult recipe to make, and it makes a lot of food. It’s also a complete meal–while it can accompany other dishes, it’s meant to stand on its own.

Well, I say on its own, but really it should be served with vegan raita. A spiced and herbed creamy yogurt sauce, it’s the perfect tangy, cooling accompaniment for biryani.

There are many kinds of biryani out there, with different regions making claim to variations on the dish. I’m Sindhi, so making a vegan version of the famous Sindhi biryani was a must do.

While a lot of Sindhis are vegetarian, Sindhi biryani is commonly found with [goat] meat. But making a vegetable version is easy. I use a mixture of chickpeas and cauliflower instead of the meat, and this means you get your protein and your veggies aka a win-win! 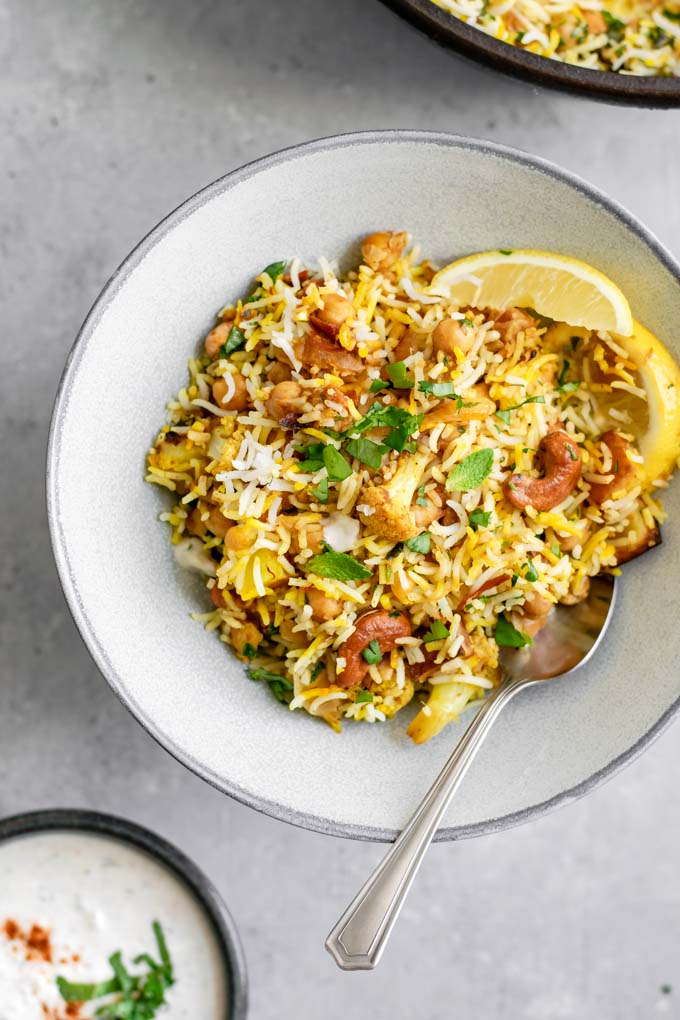 For those unfamiliar with biryani, I’ll give a quick run through. And while there are different kinds of biryani there are some unifying themes.

It’s could be described as a layered rice casserole. The rice is basmati, a fragrant, fluffy, and non-sticky long grain. Typically white rice is used, but brown could be substituted with some changes to cooking length.

Next we have the curry layer, consisting of a curry-yogurt marinated protein (and/or vegetable). Then we have the fried potato layer and the fried onion layer. Mint and cilantro are their own very important layer, as are roasted cashews.

Then, we have a layer of thinly sliced lemons. These are optional, if you’d prefer you can just squeeze lemon juice on at the end to serve.

To finish the dish, a drizzle of saffron infused [plant] milk tops the rice. The saffron soaks into some of the kernels of rice in the top layer, making for a gorgeous golden hue staining some of the rice and adding a floral/earthy/almost indescribable essence that is saffron. 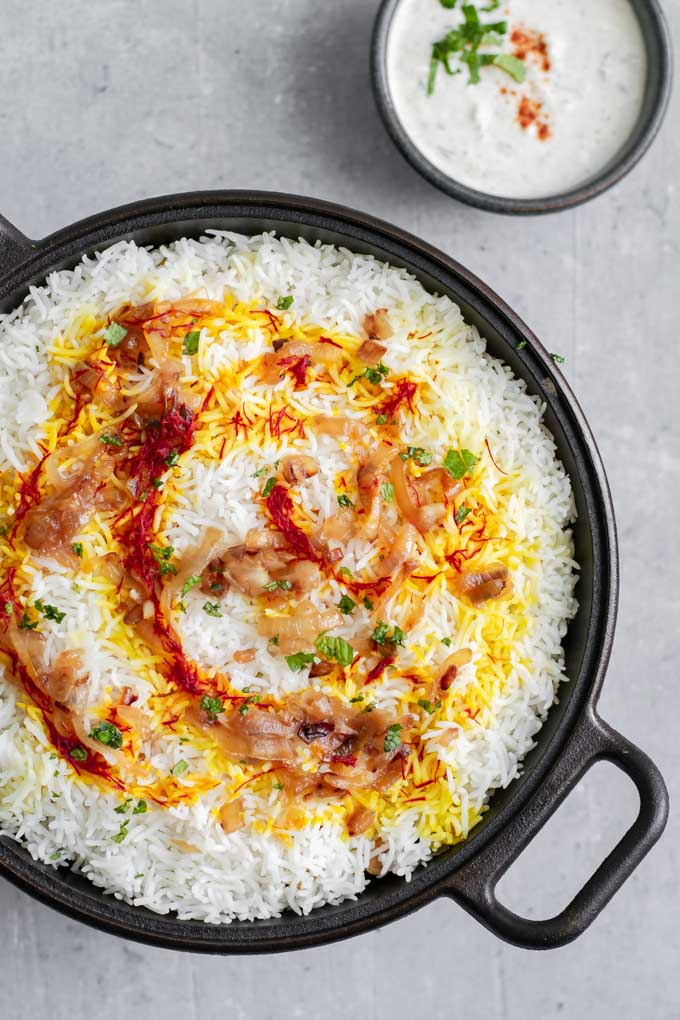 The first step of the rice layer is preparing the saffron. Saffron can be soaked in warm water or milk (I choose a non dairy milk) to release its color and scent. Combine the saffron and plant milk in a small dish and let sit until you’re ready to use it 30+ minutes later.

Next, soak the basmati rice for 20-30 minutes. I use this time to prepare the other components of the recipe.

Rinse the soaked rice really well, then cook it in a lot of salted boiling water, similarly to how pasta is cooked, until the rice is about 3/4 of the way cooked. This only takes 5-7 minutes for white rice. Then drain the rice and set it aside. 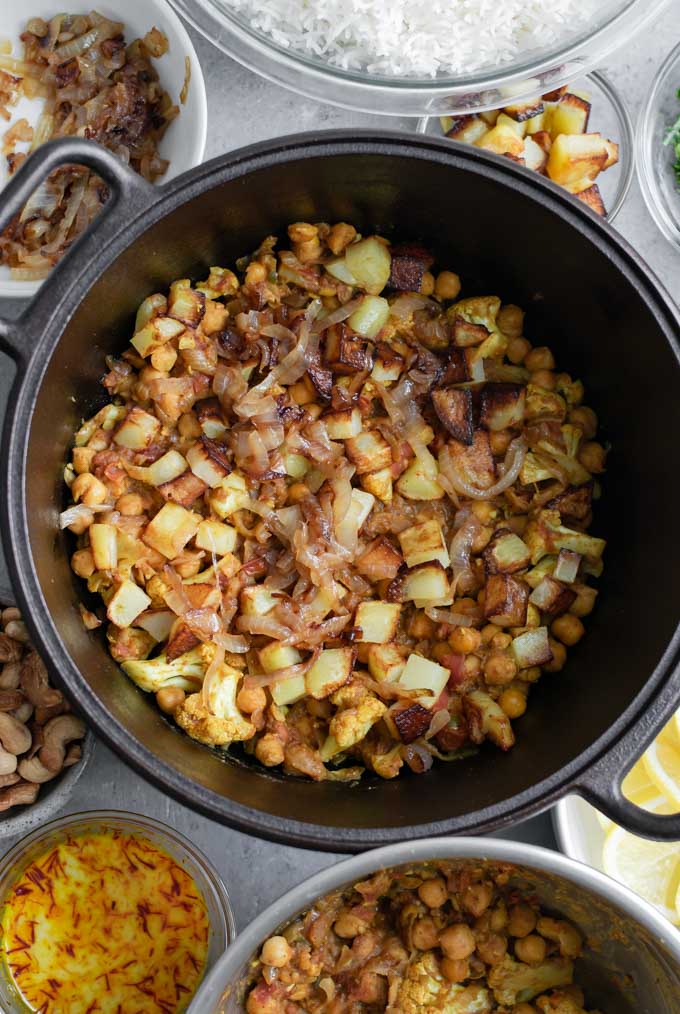 The curry layer is the most complex of the layers. It starts with a curry marinated protein (and/or vegetable), which is then cooked up with onion, garlic, ginger, chiles and tomato. You get a flavorful, saucy, and delicious meal.

I like to use plain and unsweetened coconut yogurt as the mild coconut flavor pairs well with Indian cuisine, but any plant based plain yogurt will work. The yogurt is mixed with spices, and this is where I take some liberties and short cuts.

If you live near an Indian grocery store you will be able to find spice mixes for different kinds of biryani and feel free to pick that up (the Sindhi biryani mix if possible of course!), just be careful because these spice mixes can be very spicy. Other recipes will have you make your own spice mixes from whole spices, which is extra special and delicious no doubt, but trying to keep this recipe accessible I take advantage of garam masala (and a lot of it) so that the spice list is just 3 ingredients long! 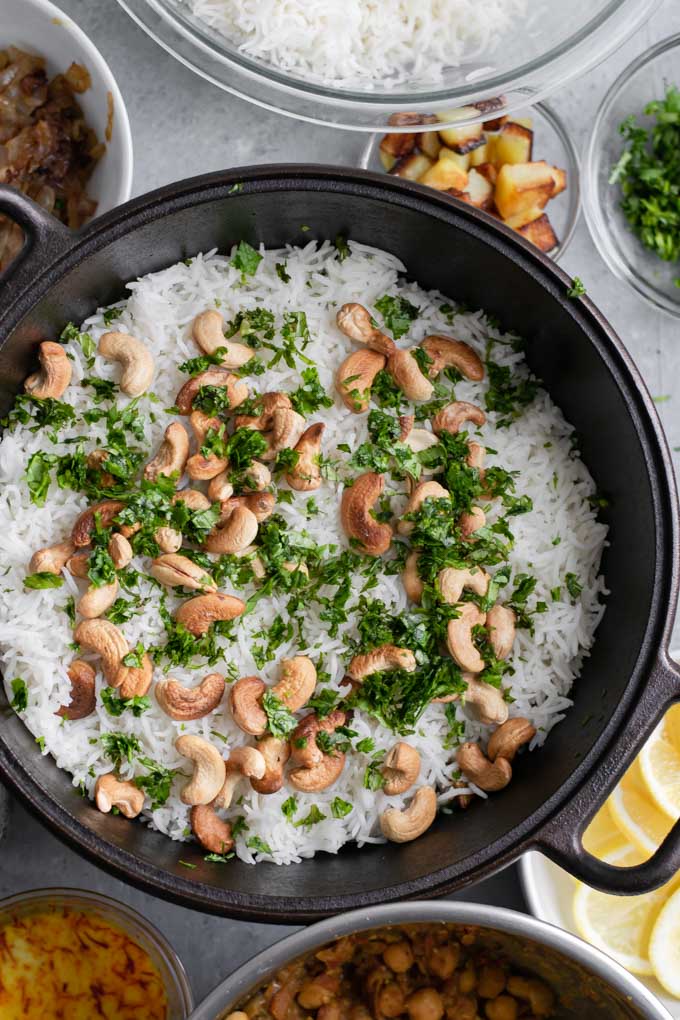 Garam masala is a spice blend and it varies from region to region and brand to brand, but what they do always have in common is that they’re darn delicious! And easy to find everywhere Indian cuisine is popular.

I top off the garam masala with an almost equal amount of ground coriander, some ground turmeric, and cayenne.

Chickpeas and cauliflower are marinated in this curry-spiced yogurt. It can be mixed together right before cooking, or put together in advance, keeping in the fridge if far enough in advance.

To cook, first we fry up onions, then remove some of those to reserve for the fried onion layer. While some recipes might deep fry the onions until crispy, I like sautéing them to lightly caramelize. To the rest of the onions we add garlic, ginger, and chiles and let those fry for a minute before adding chopped tomatoes.

Cook until the tomatoes are saucy, just a few minutes, then add the yogurt marinated chickpeas and cauliflower. Cover and let those cook until the cauliflower is just tender. You don’t want to overcook it at this point since it’ll get cooked further once everything is put together. 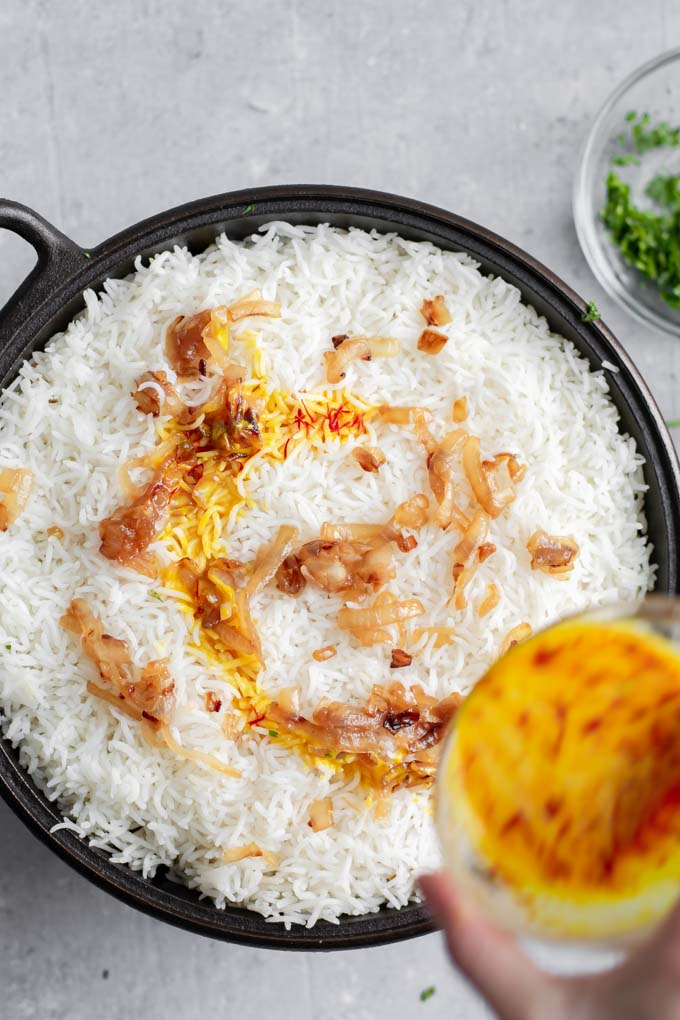 The potatoes actually get fried between whipping together the curry-yogurt marinated chickpeas and cauliflower and cooking the onion. I mean, you could cook them separately but I like to minimize dishes and oil used, so fry the potatoes before I fry the onions.

For the potatoes, just pan fry them with oil and a bit of salt until they are golden and fork tender. Remove them from the oil and set aside until ready to use!

The last layers and preparing the biryani:

Chop up your mint and cilantro, and roast your cashews. Slice up the lemon. Then gather everything mis en place.

Grab a large casserole dish or dutch oven. Bonus points if it has a heavy lid! Then gather around the par-cooked rice, the curry, the potatoes, the fried onion, the roasted cashews, the sliced lemon, and the chopped mint and cilantro.

Then we layer in the following order:

Put the lid over the top, if it’s not a heavy lid then first put a layer of aluminum foil over before the lid. Stick the pot over the burner and let everything steam gently for 15-20 minutes. The rice should be fully cooked at this point!

Serve the biryani with plenty of vegan raita, and squeeze extra lemon juice on each serving.

This is a special dish, perfect for serving to guests or loved ones. I hope you give it a try as it’s so delicious and delightful to eat! 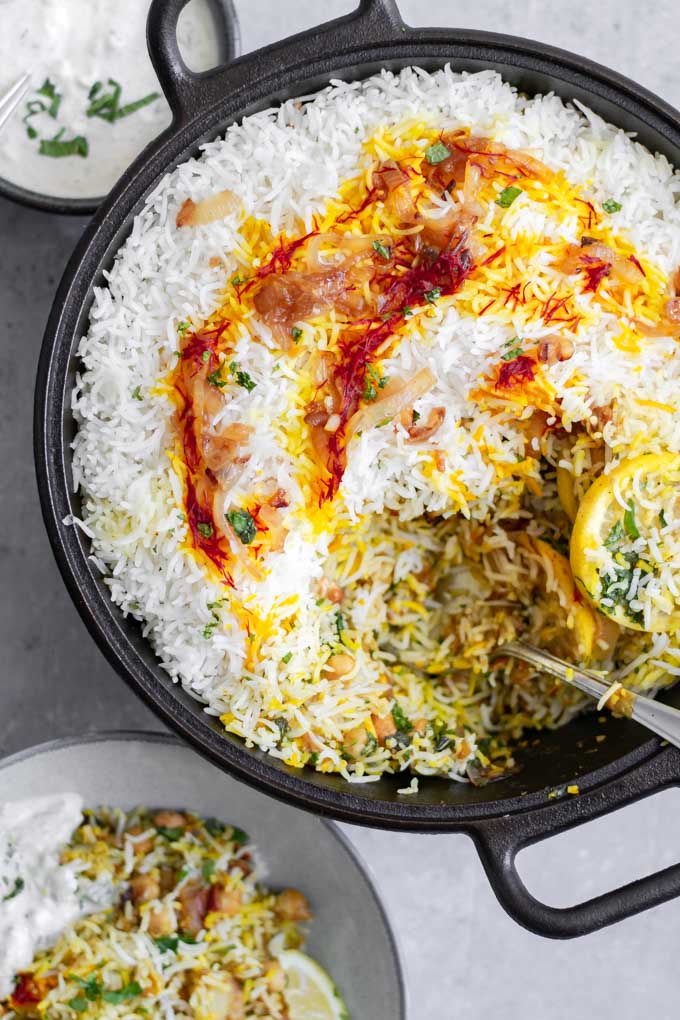 *To dry roast cashews, toast in oven at 325ºF for 10-15 minutes, stirring occasionally until the nuts are a shade darker 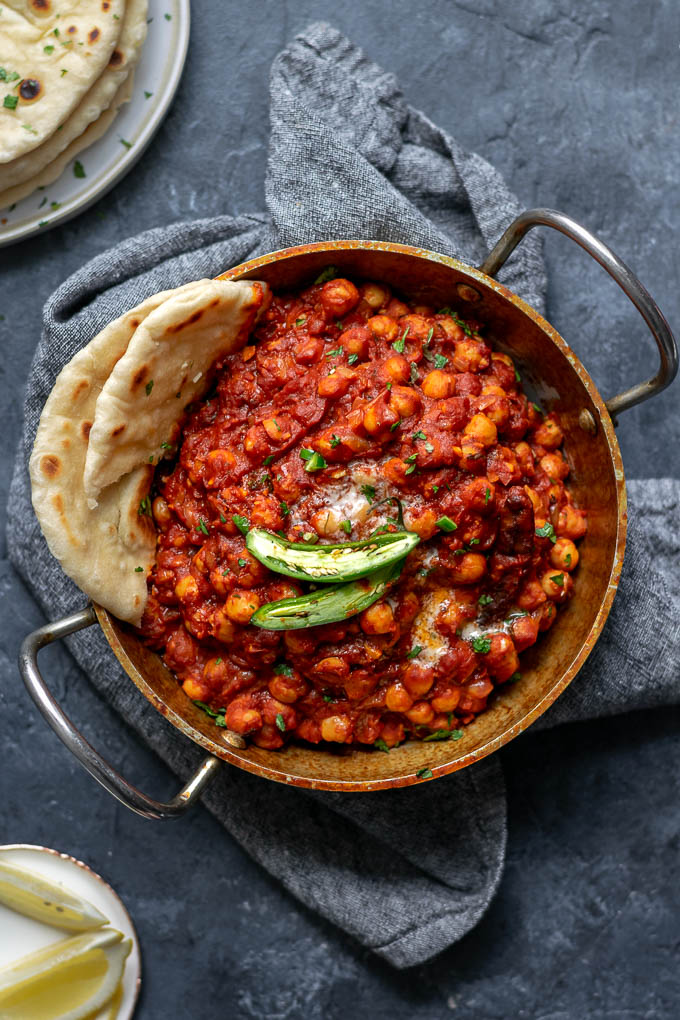 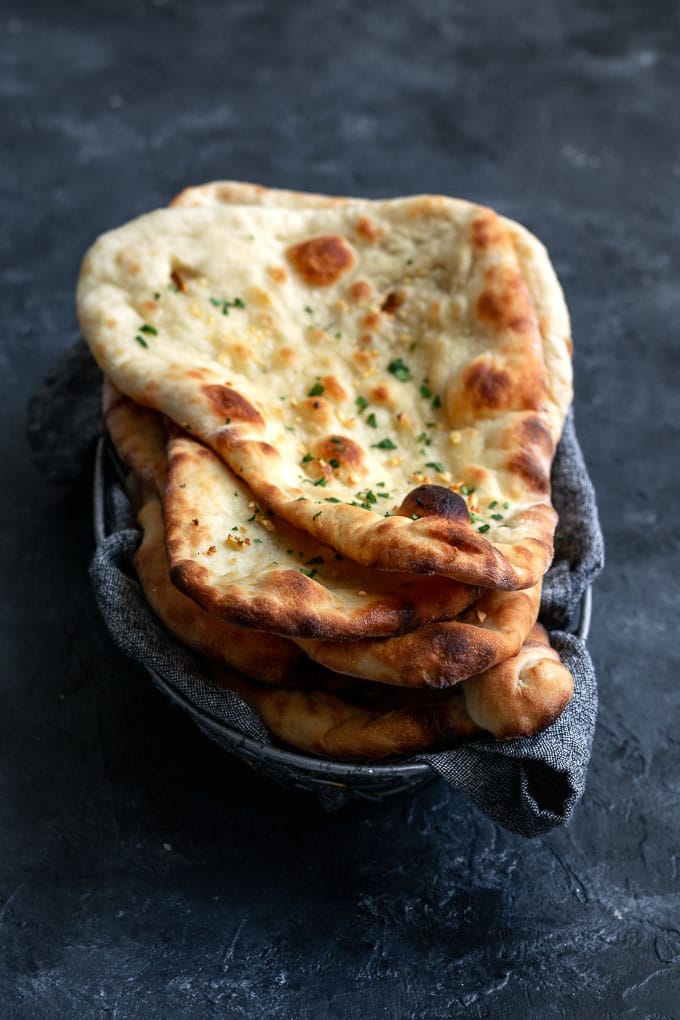 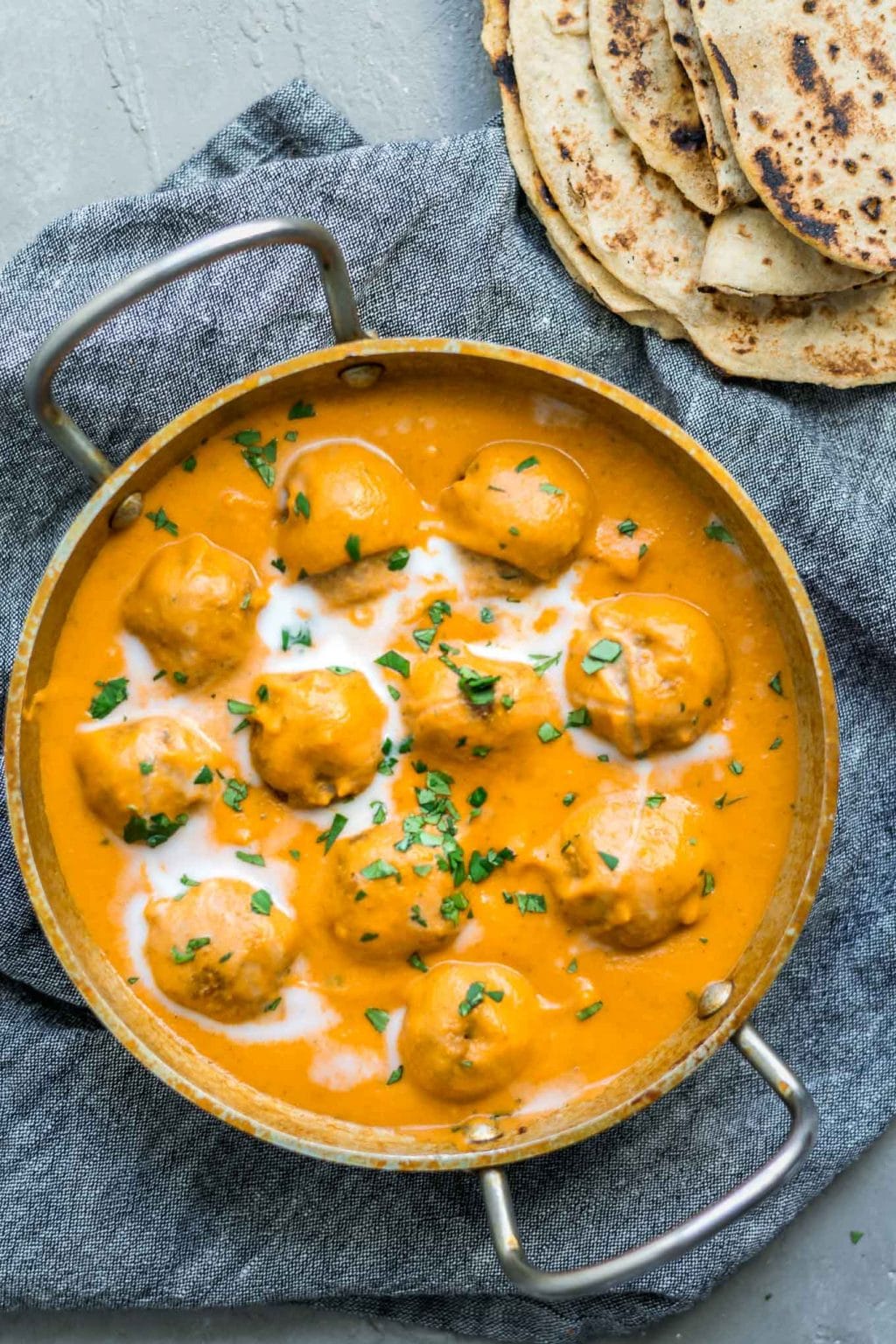 My family’s Christmas Eve tradition is to gather with our Jewish friends for Indian food. So this year, I made Eva’s biryani, chana masala, raita, and mango lassi for a feast at home. These are, by far, absolutely the most delicious Indian recipes I’ve ever made - and I’ve made recipes from many sources. The biryani, in particular, is incredible - better than what we’ve had at many restaurants! It requires a few steps but it is so worth it for a special meal (and lots of leftovers - the best!) Thank you, Eva - I will come back to your recipes again and again!

I'm going to make this for a special Potlatch event. Does it keep well. I'll have to make it two days before the Potlatch. I'm thinking I won't cook it quite as long, and then put it in the oven to finish, and add the garnishes just before serving.

Hi Eva! I don't have a pot with a heavy lid, can I still finish this in the oven by just covering with foil?and what temperature would you recommend? Thank you

Hi Rossella, if you have a heavy pot (with a thick bottom so the stuff towards the bottom doesn't burn!) I still recommend making this stovetop. Just put 1-2 layers of foil over the top and then you can put the lid on top of that. It should be well sealed that way. If stovetop doesn't make sense for you based on what you have, then you should be able to bake it. I haven't tried this, but would put it to 350 ºF and try baking it for 20-30 minutes. I should still be sealed in the oven with foil or an oven safe lid.

Hi Eva. I am trying to understand the different biryanis that are out there. Do you know what makes this a Sindhi biryani? Are there spices or other ingredients native to the Sindhi heritage that are used?

Hi Sid, there's not a completely clear cut answer to your question as differences can vary household to household and there is overlap in the different styles of biryani, but it has to do with the way the meat or vegetables are prepared as well as the spices used. Sindhi biryani will be spicy, have fried potatoes, and a tangy yogurt marinade for the 'meat'/veggies. They sell biryani spice mixes for all different varieties of biryani at Indian grocery stores, including Sindhi biryani so you can always experiment with some different kinds! I should also note that I try to write my recipes so that they're accessible to a Western audience, so will make some adjustments with the spices and take advantage of pre-made spice mixes.

Delicious and kid friendly. It makes soooo much so I think I'll try 1/2 the recipe next time. I'm excited to try more of your recipes!