A peppercorn and sun dried tomato homemade seitan deli meat, perfect for making thin slices for sandwiches and cheese plates, or can be chopped or shredded and cooked for any recipe! 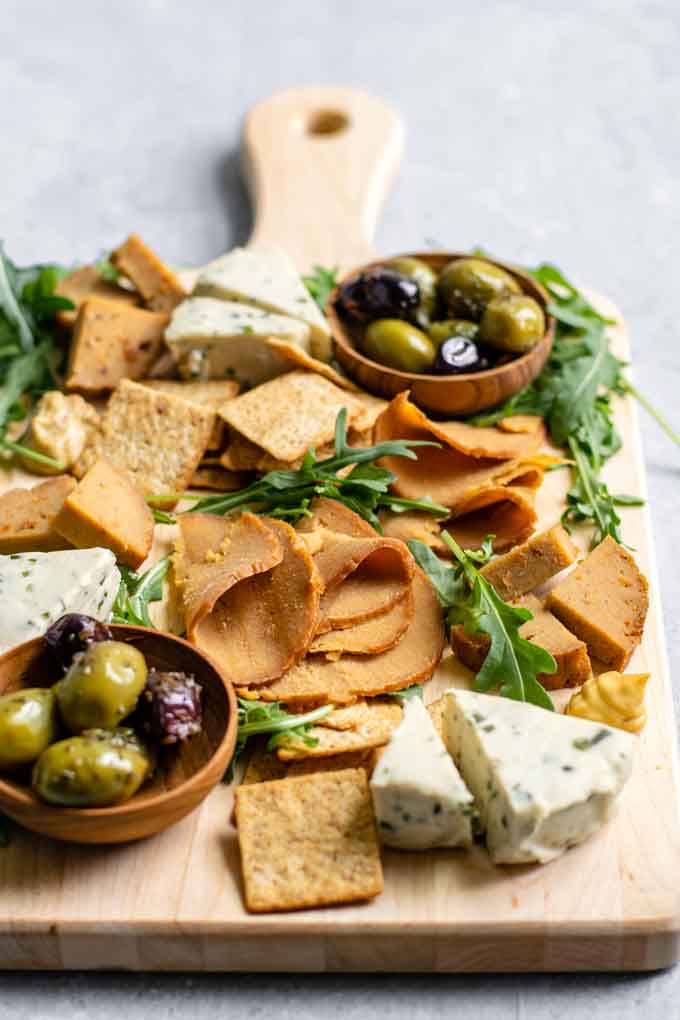 This homemade seitan deli meat is so tasty and tender. It’s infused with sun dried tomatoes and peppercorn, with hints of rosemary for a delicious savory flavor and peppery finish.

Seitan is a wonderful source of protein and this vegan “deli meat” is no different. Just a little goes a long way in filling you up and keeping you satiated!

Homemade seitan is inexpensive, surprisingly easy to make, and adaptable to your own tastes. It just takes a bit of time and some patience, it’s not a last minute recipe. But it makes about 3x the amount as a store bought package of vegan deli meat slices and the recipe can be doubled, or extra can be frozen as needed. 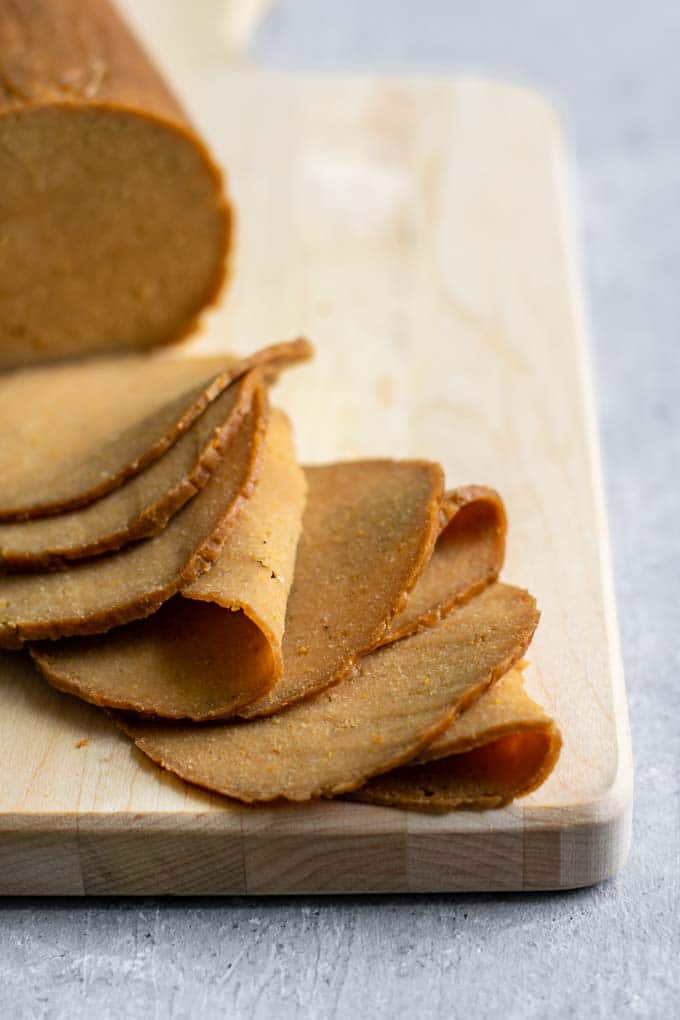 So at this point, if you’ve never encountered seitan (also sometimes called wheat gluten) or just not known what it is, let me tell you! It’s a vegan protein that’s often fashioned as a meat substitute, but has been around for centuries and used in Buddhist cuisine in ancient China and Japan.

Seitan can be prepared for a myriad of different recipes. Fry it, use it in soups, on pizza, in pasta sauces, stir fries, sandwiches, and more. It soaks up flavor beautifully, has a great chewy texture, and is just generally a really cool and versatile vegan protein.

Quite simply, it is made from the protein of the wheat grain (gluten). Early seitan was made by washing the starches from a simple flour + water dough and then cooking chewy protein left behind. 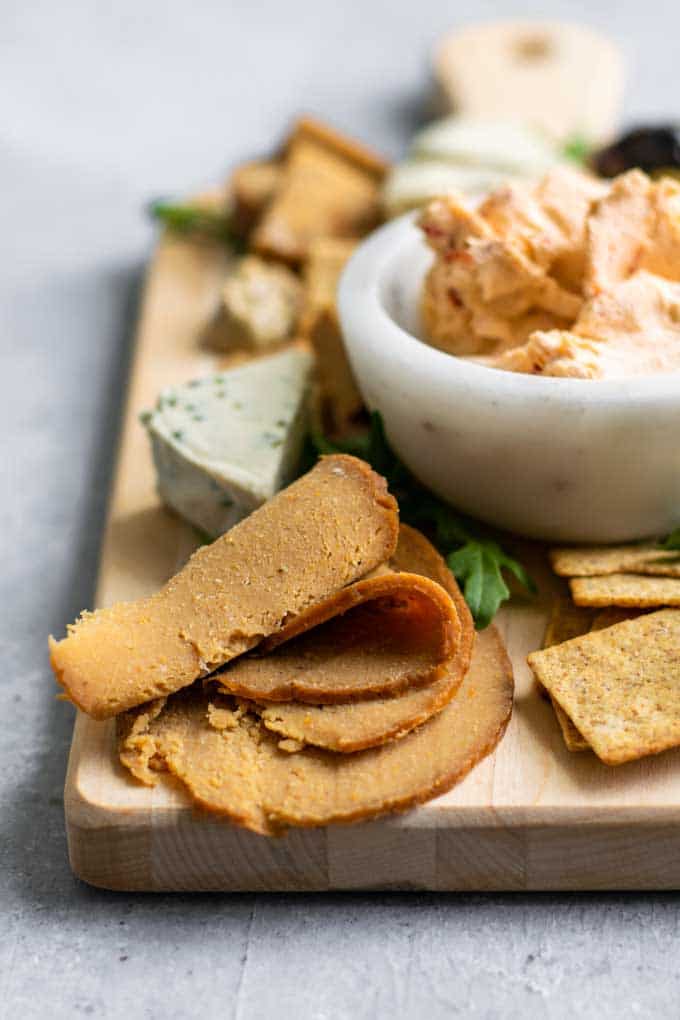 Of course, if you’re just using vital wheat gluten and water, it won’t taste great! Instead we add spices for flavor and can adapt the texture as desired by adding oil and/or beans, tofu, cutting the gluten with some chickpea flour, or even added starch. 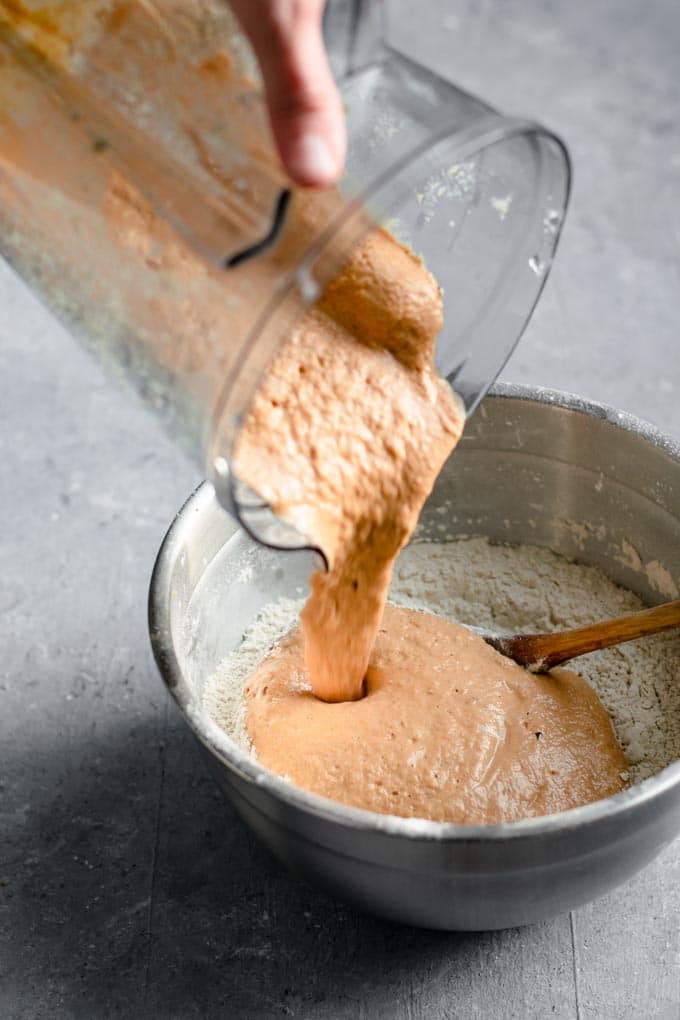 To cook seitan there are a bunch of methods. You can simmer it, and this is typically done in a flavorful broth so that the seitan can absorb some of that flavor. You can also steam it, which is a really fool proof method and results in a great final texture in my opinion. And lastly you can bake it.

There are additional methods to cook seitan that stem from those 3 main methods: such as baking it in a flavorful broth, or a stove top combo fry/steam or simmer method. 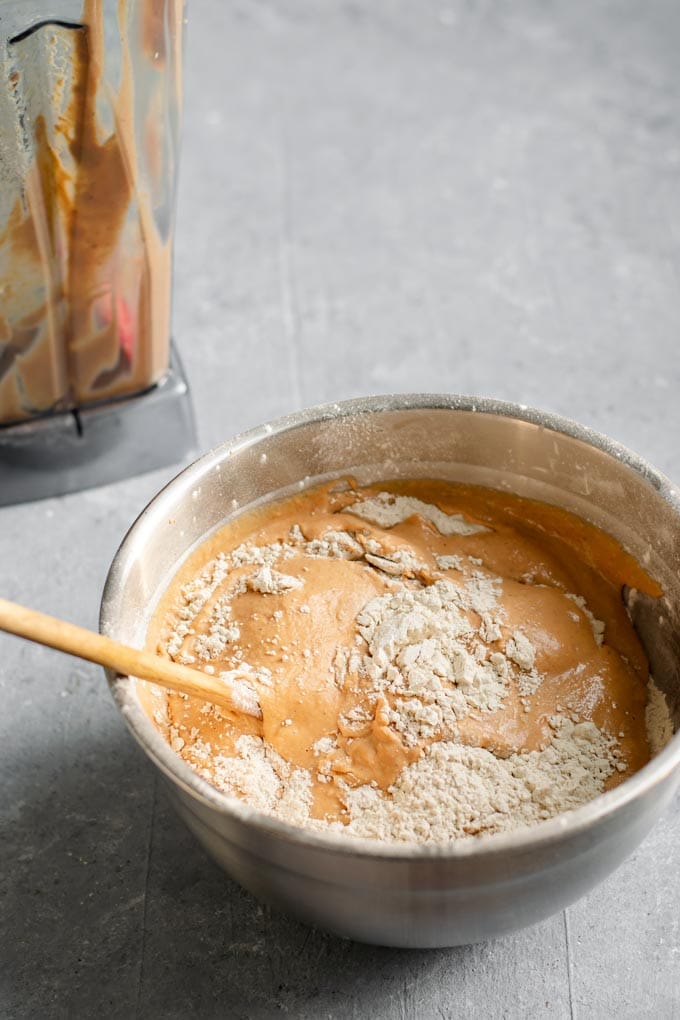 The method for this seitan deli meat is straightforward and easy. We create a wet mixture and dry, add the wet to the dry and bring it together, kneading for just a couple of minutes. Then tightly wrap up seitan dough and steam it to cook. Once steamed, transfer to the oven where it will take on a denser texture (perfect for those thin ‘deli meat’ slices) and develop a chewy skin.

For the wet mixture we have a somewhat unusual addition of tofu. Tofu changes the texture of seitan to something I really enjoy. It keeps it softer and juicier, and it’s perfect for the seitan deli meat. Choose a spongey (versus silken) tofu of the firm variety. If extra firm is all you can find go ahead and use that, but avoid anything that tips into the realm of super firm. 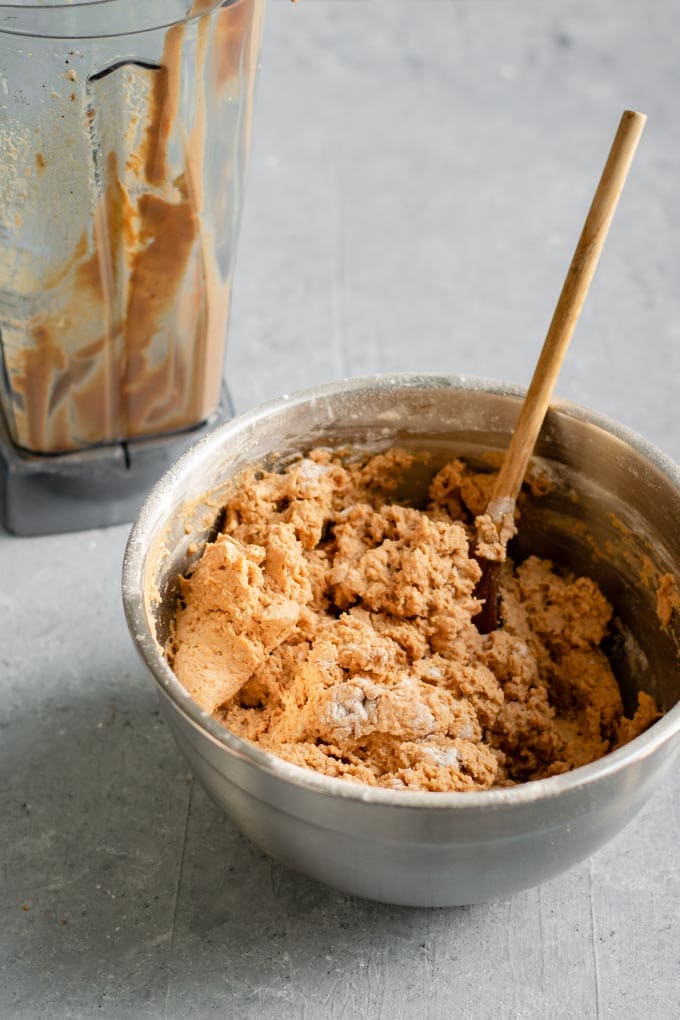 With tofu we add sun dried tomatoes, these add some delicious tomatoey undertones to the seitan and help give it that Italian-leaning savory flavor. I used soft and pliable dry-packed sun dried tomatoes, but oil packed would work as well. If your sun dried tomatoes are dried out, soak them in hot water for a bit to soften them. Also, if you’re using a high speed blender you can pop them in whole but otherwise you might want to chop a bit to help your blender out.

A bit of oil tenderizes the seitan and use vegetable broth instead of water to infuse the seitan loaf with flavor. Lemon juice brightens the flavor and the acidity helps keep the seitan from tasting too bready. 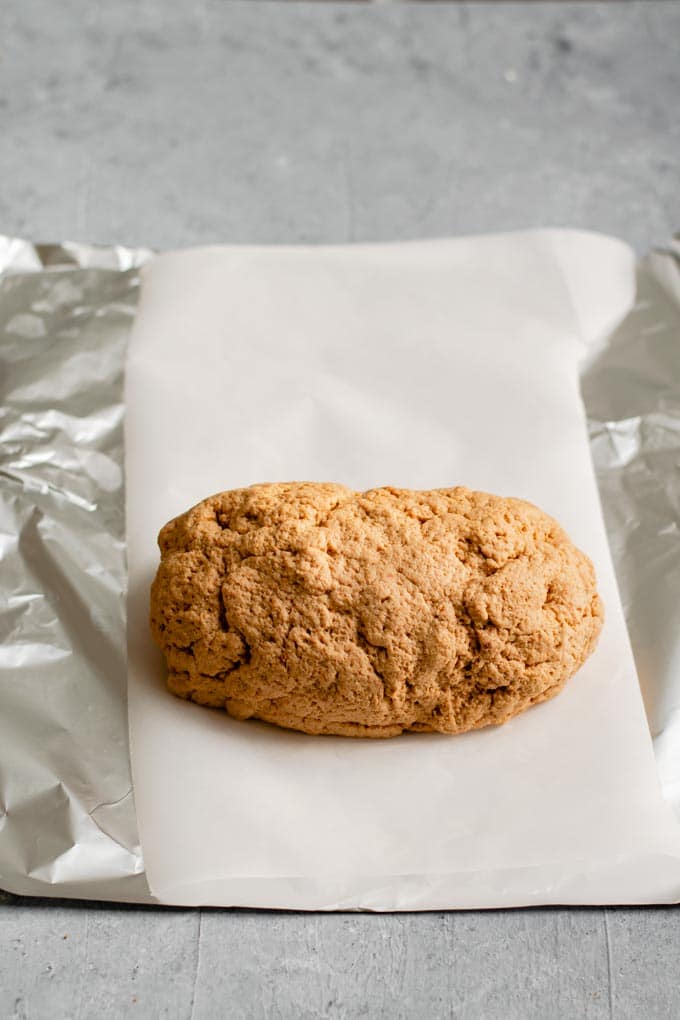 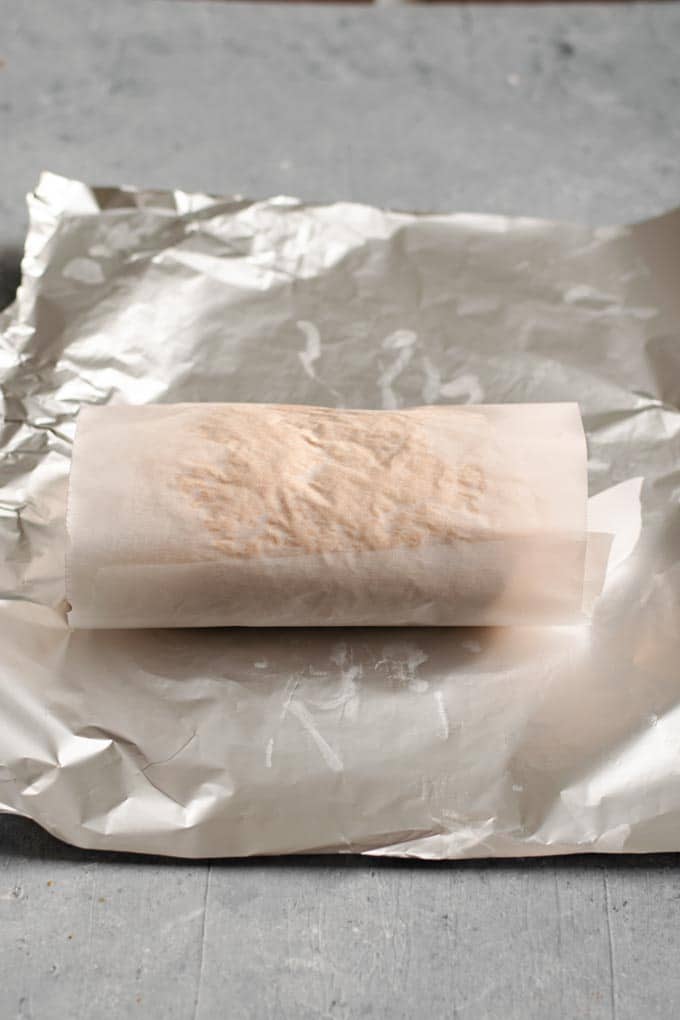 Add soy sauce and garlic, a sprinkling of salt and a generous amount of black pepper. For spices add onion powder and dried rosemary. Add all of these ingredients to a blender and blend until smooth, though a few small pieces of sun dried tomato here and there are fine, and will just show up as texture in the final seitan loaf.

Whisk together the dry ingredeints: vital wheat gluten, chickpea flour (besan), and corn starch. Add the wet to the dry and knead to form a soft and stringy dough. The stringiness is the gluten developing.

This dough gets formed into a short and fat log shape and wrapped tightly in parchment paper and foil to seal up and cook.

Seitan should be fully cooled before using, as it gets firmer as it cools and will be easier to slice as well as have a better texture. 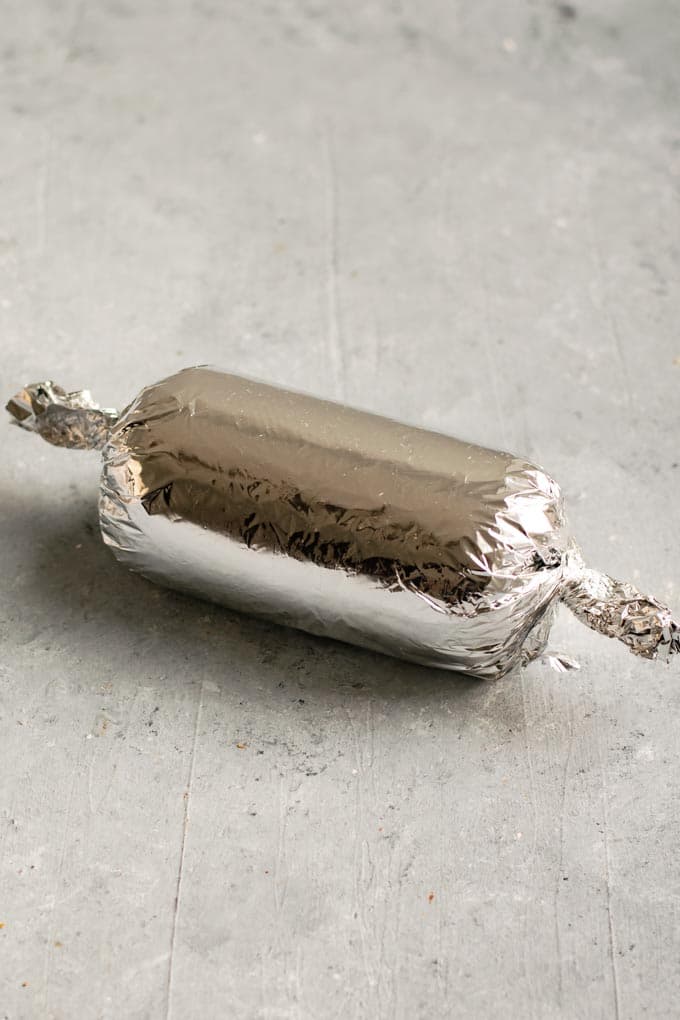 How to use the vegan deli meats:

Well, you can use them any way you might have used the non-vegan stuff. Sandwiches come to mind of course, but so do cheese plates! These are so good sliced up and eaten with a dab of cashew cheese and some spicy dijon mustard on a cracker.

You can also chop up the seitan into a different shape, as seen in the cheese plate here I cut half sized logs (see recipe notes for directions on how to make 2 smaller seitan loaves) of the seitan into wedges. 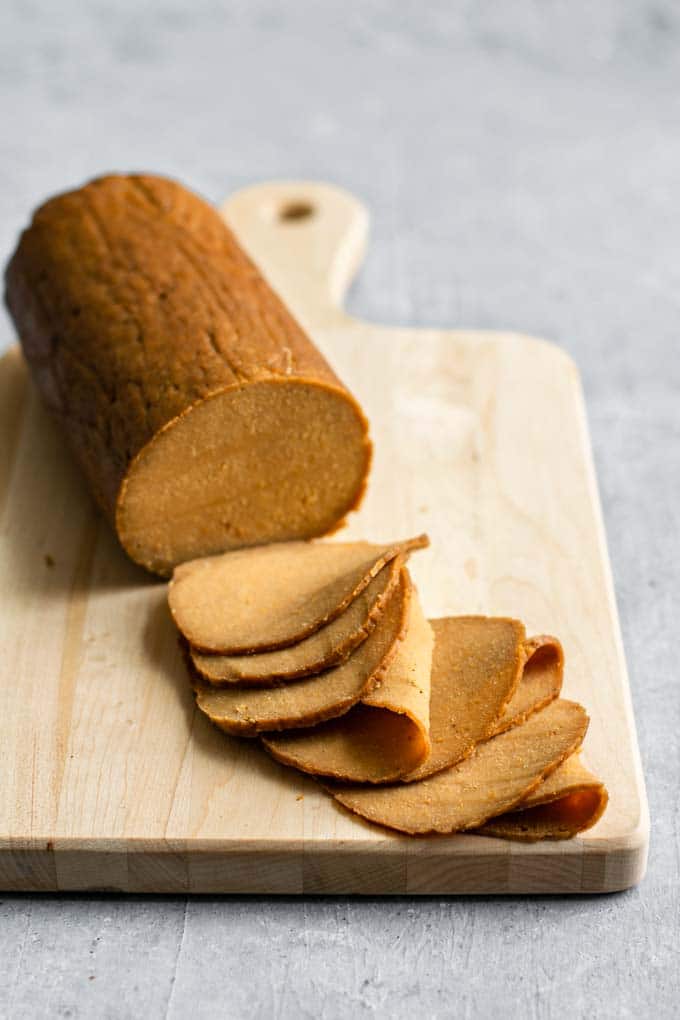 Fry them up, bread them, bake them, add them to soups–whatever you want really! The seitan doesn’t need further cooking, so any additional frying or simmering is fully optional and should be done based on the recipe.

I imagine this seitan would be delicious in my vegan baked ziti recipe, or dipped into my vegan cheese fondue. I also would love it on this kale, roasted tomato, and seitan white pizza! 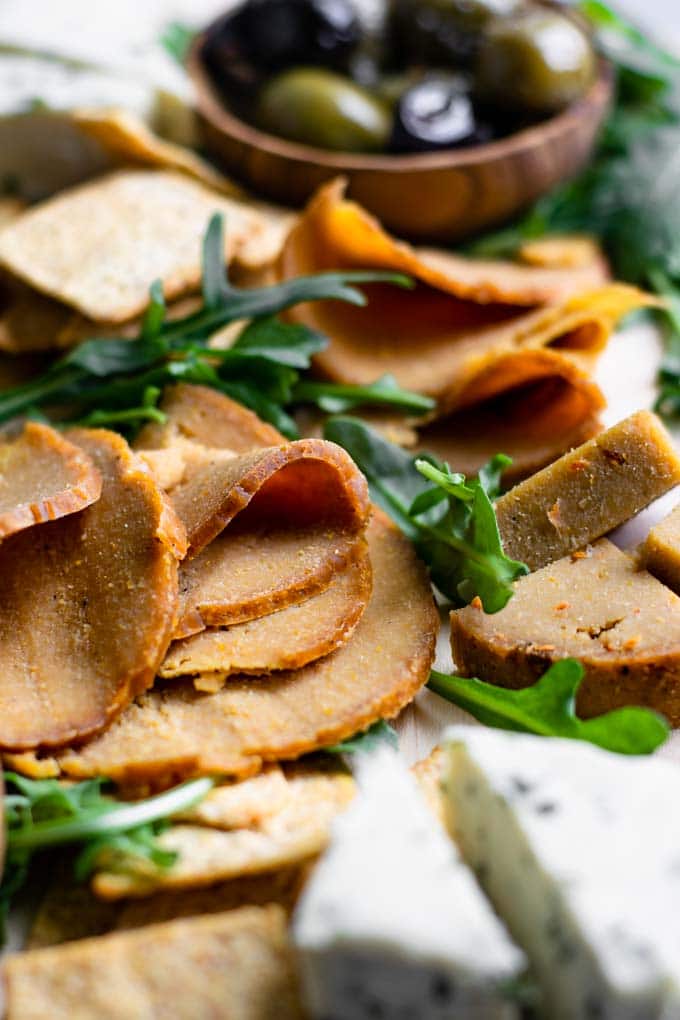 If you make this peppercorn and sun dried tomato homemade seitan deli meat, leave a comment below and rate the recipe on the recipe card. And please share your photos with me on Instagram, tag @thecuriouschickpea and #thecuriouschickpea, I would love to see and hear how you use it!

You can make two smaller loaves of seitan instead of one large one, just divide the dough in half, and shape it into two rolls in two pieces of parchment/foil, keeping them about 5-6" long, and follow the same directions for cooking.

You can skip the baking step and increase the steaming time to 1 hour and 15 minutes to cook, but baking after steaming gives it the chewy outside skin around the seitan loaf and creates a slightly denser texture to the seitan.

Do you drain the tofu and press it?

@Renee, you can drain out the extra water as you remove the block of tofu, but there is no need to press it.

Added a smidgen of liquid smoke. It was super delicious and not at all expensive or difficult. I look forward to freezing and slicing deli style.

I made this and it was GREAT!! I didn't have enough sun dried tomatoes so that flavor didn't come through as I would have liked but it was still delicious. I am excited to make another loaf with the full amount since I love sun dried tomatoes. I am making a version today with mushrooms and balsamic vinegar (like Field Roast version.) I know I will be making many versions of this recipe! lol It is easy to make and to me tastes better than the store-bought versions. Thank you so much for posting this recipe!! I am excited to check out your other recipes.

Hi there. I'm eager to try this but wanted to ask a question. I just made the original recipe from Vegan Dad (didn't realize yours was a modification of his) and the loaf looked amazing when I took it out of the oven: full, round, and very loaf-like. I opened the foil to let it cool, then walked away for about 10 minutes, and when I came back the loaf had deflated into a wrinkly mound. It's still edible but I won't get the nice round slices I was hoping for. Before I try again with your version, is there something I should do differently to ensure my loaf stays intact?

Hi Rebekka, I've never had any issues with this deflating and haven't heard that from anyone else who has made it. While I was inspired by Vegan Dad's method, I haven't actually made his version so can't speak to what happened there. Seitan can get a bit puffy during cooking, which is why we wrap it in foil to keep it from over expanding. That's the only idea I have where something may have gone wrong, if it expanded then collapsed. I hope that my recipe comes out for you if you give it a try!

what can I sub for wheat gluten? cant do that

Hi Dana, unfortunately you cannot sub the wheat gluten in this recipe as seitan is made from gluten and nothing else has those same properties.